Hugh Dennis Married Status Now, Who Is His Partner?

By LRU Writer | On: December 29, 2019
Hugh-Dennis os one of the best British comedians right now...has been married twice in his life...the first wife was Miranda Carroll...divorced her due to marital problems and unadventurous relationship...married for the second time to Kate Abbot-Anderson...separated from her as well...is not with Outnumbered co-star Claire Skinner...has two children...his age, height, and movies and TV shows are given below... 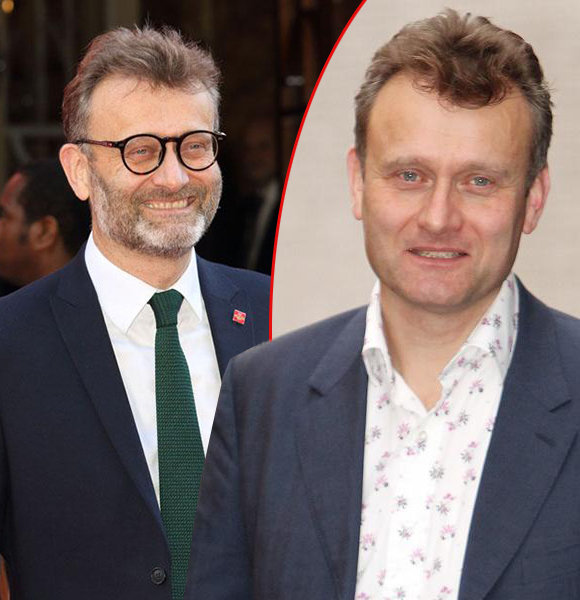 Hugh Dennis is one of the prominent comedians to have come out from England in recent times. He is mostly known for his role in the BBC One sitcom Outnumbered (2007-2016) and My Hero (2000-2006).

Hugh began his career from a 1987 TV series named Carrott Confidential, in which he played various characters throughout his time in the show. And since his debut, he has gone on to gather an impressive 36 credits in the acting department, most of which include TV shows and sitcoms, with a few movies.

In addition to portraying characters, he has also appeared as himself in many game shows, and TV shows, most notably in the long-running TV series Mock the Week (2005-2019). He has 100 credits appearing as himself, and nine credits as a writer.

Hugh Dennis has had a couple of relationships in the past. He has been married twice and divorced the same number of times.

The comedian’s first wife was Miranda Caroll. The ex-couple met when both of them were studying A-levels. And after passing A-levels, they both went to different universities.

Another British Personality:- Who Is Jenna Coleman Boyfriend Now? Her Dating History

However, they stayed loyal to each other. Hugh and Miranda met each other often. And their relationship continued, all the while when Miranda was realizing that something was missing between them.

Hugh popped the question to Miranda during a restaurant on Fulham Road. However, he didn’t have a ring when he proposed. Miranda accepted, and they were both in their mid-20s when they got married.

And came the marriage, which was held at a church in Ipswich in 1987. Hugh’s father officiated the wedding.

Although Miranda then thought that their wedding day was the happiest day of her life, she always knew that something was missing from her marriage. Hugh wasn’t an exciting enough guy for Miranda. She described her marriage to Hugh as ‘unadventurous.’

Another reason that the marriage wasn’t working for both of them was their wish for children. Hugh wanted to have kids, whereas Miranda didn’t, and didn’t want anyone to be dependent on her.

They started having problems around 1991 and even went to marriage counseling. However, after only one session, they knew the relationship wasn’t meant to last. So, the ex-couple divorced in 1993, and since then, both of them have gone their separate ways. After the divorce, the couple got married on 15th June 1996.

Hugh’s wish that he couldn’t fulfill during his first marriage got fulfilled with Kate. The ex-couple went on to have two children - son Freddie, born in 1997, and daughter Meg, born in 1999.

But, Hugh, second marriage couldn’t last a lifetime, either. The couple divorced in 2015, after 19 years of being in a married relationship.

The comedian has found love for the third time and has been dating a co-star from one of his shows as of December 2019.

Hugh is in a relationship with actress Claire Skinner, the actress who played wife to his character of Pete in the long-running sitcom Outnumbered. And the couple, who had been acting as partners in front of the camera, decided to enter a partnership off-camera as well. The first hint about their relationship was given away in July 2018 by another actor, Daniel Roche, the couple’s on-screen son in the same show. And Daniel also claimed that Hugh and Claire had been going out for a long time during a chat with his fans on Instagram.

As of now, the pair are living in the comedian’s $1.56 million London penthouse apartment.