By LRU Writer | On: March 31, 2019
Former NFL wide receiver and actor Isaiah Mustafa is known for his hilarious monologues in The Man Your Man Could Smell Like commercials for Old Spice and fantasy series Shadowhunters. The shirtless hunk also hugged the limelight because of an innovative proposal to his girlfriend. Whats more, the lady-love accepted the hunks proposal with the couple now happily engaged to get married. 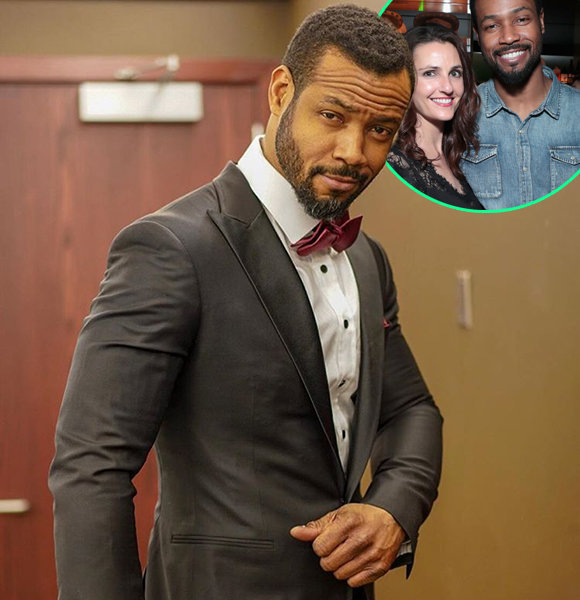 Actor Isaiah Mustafa gets recognized for his hilarious monologues in The Man Your Man Could Smell Like commercials for Old Spice and fantasy series Shadowhunters.

The shirtless hunk hugged the limelight because of an innovative proposal to his girlfriend. The lady-love accepted the hunks proposal with the couple now happily married.

Isaiah Mustafa, the man, who pops up on the TV screen calling out all man and ladies to use Old Spice without his shirt, choose to put on a shirt for his big day.

The TV personality was off to New Zealand to soak up the sun, for his Christmas holiday in 2016. The vlogger was chronicling his holiday routine for his travel vlog on a beach with his girlfriend, Lisa Mitchell.

And out of the blue, the former NFL wide receiver Isaiah brought the ring and bent his knee popping up the question to his sweetheart. Lisa too engrossed in looking up at the drone filming for their travel vlog was stunned by his antics.

And, the amused lady-love of Isaiah answered 'Yes.' The couple celebrated their big moment embracing in each other's arms and a kiss. The former footballer shared his romantic proposal in his Twitter video with commentary in his trademark husky voice.

His followers were quick to congratulate the couple with lady fans swooning for the Old Spice Guy with an innovative proposal technique.

Before getting engaged, the pair enjoyed a fruitful dating life for a considerable time. The love between the two continued after the engagement.

The married duo had initially met at WonderCon in March 2016. Back then, Lisa was working as a publicist for Warner Brothers while Isaiah was busy promoting Shadowhunters.

With the couple madly in love with each other, the only announcement left from the couple was their wedding day. It was not a matter of if, but just when, the couple might decide to walk down the aisle to get married as they looked ready to be pronounced husband and wife.

However, Isaiah and his wife, Lisa didn't commit to marriage until May of 2018, almost a year and a half after getting engaged.

Held at Camp Lucy in Austin, Texas, the duo's wedding was a star-studded affair. The likes of Katherine McNamara, Harry Shum Jr., Alberto Rosende and Emeraude Toubia all made the guest list.

On the big day, Isaiah opted for a custom Elevee tux while his bride wore a Monique Lhuillier’s Emanuela wedding gown. His teenage daughter, Haley walked him down the aisle where he and his wife Lisa exchanged vows in front of the guests. In subsequent interviews after the ceremony, the married duo spoke of their dreams to bear more children.

From Gay Bar To Hollywood; Religion & Net Worth

Portland native briefly played basketball and did a bit of track and field, but moved into football to get a university scholarship at Moorpark College. His NFL career however never took off, and the best he made was to a practice squad for Tennessee Oilers.

After his days in the NFL practice squad, Isaiah, who follows Christian religion, moved to Hollywood and appeared in bit-part roles.

Isaiah worked in the famous gay bar, The Abbey during his acting classes and bagged his breakthrough role in the 2009 comedy flick, Horrible Bosses.

His big break came when he was signed up for the Old Spice Commercials. With humorous monologues featured in short commercials, The Man Your Man Could Smell Like add campaign became viral which opened up various doors of possibilities for the footballer turned actor. Isaiah Mustafa stars in Old Spice's The Man Your Man Could Smell Like in 2010 (Photo: dontfastforward.wordpress.com)

After gaining superstardom as the Old Spice Guy, the actor was roped in to play the lead role in Madea’s Big Happy Family.

And during his appearance in the Old Spice commercial, the actor also found love and briefly dated actresses Neve Campbell in 2010 and Kathy Griffin in 2011.

In 2019, it got announced that Isaiah would be starring in the sequel of the hit horror flick, It entitled It: Chapter 2 as Mike Hanlon. Given his popularity among the Shadowhunters fandom, it's no surprise that he boasts a reported net worth of $5 million.