By LRU Writer | On: September 10, 2019
Jake Muzzin is a star ice-hockey player. Although drafted by Pittsburgh Penguins initially in 2007, he only made his NHL debut with Los Angeles Kings in 2010-2011...Jake won in his personal life when he got engaged to his long-time girlfriend... In spite of the sneaky first encounter, things went well between Jake’s wife and parents... 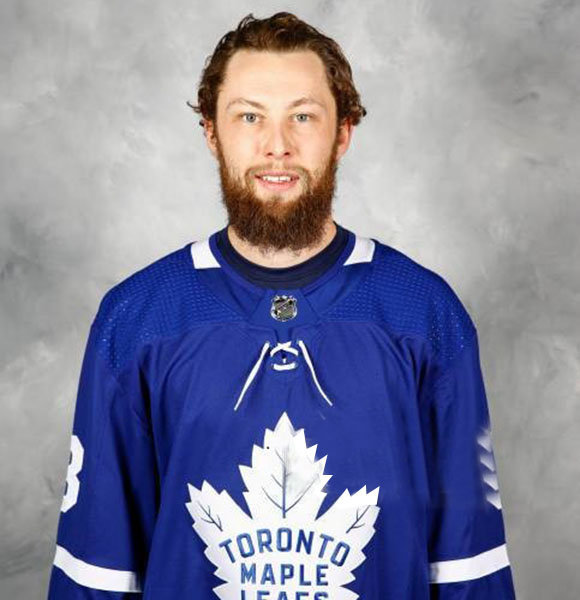 Although drafted by Pittsburgh Penguins initially in 2007, ice-hockey player Jake Muzzin made his NHL debut with Los Angeles Kings only in 2010-2011.

The reason behind the delay was Jake’s injury and subsequent rehab period prior to his expected debut in 2007.

Despite all the adversities, he rose above them all and became a prominent hockey player. Today, he is the crucial defenseman of Toronto Maple Leafs,

Jake won in his personal life when he got engaged to his long-time girlfriend, Courtney Muzzin, in December 2015. The loved-up pair didn’t take long to plan their wedding and got married on 5 August 2016.

The wedding was an intimate affair surrounded by the couple’s friends and family. The ceremony was a traditional event with a bachelorette ceremony for the bride. Following up the bridal party was the intimate wedding ceremony where the groom’s mother - Judy Muzzin - gave a rather inside scoop about Jake and his wife’s love story. According to Jake’s mama, she first met her daughter-in-law on a window still as Courtney was trying to sneak out Jake from the house. In spite of the sneaky first encounter, things went well between Jake’s wife and parents. No wonder, the matriarch and Jake’s father Ed Muzzin fully approved of the wedding.

Well, they can’t be blamed as Jake and Courtney were the cutest high school sweethearts. According to Jake, he snuck up a note for the lady and asked her out. Although she hesitated at first, the couple ended up going out later that week.

The Maple Leafs star and his wife’s fairy tale continued as Courtney became pregnant with their first child in 2018. The joy doubled when a healthy baby girl entered their lives in April 2019.

The pair continues to remain couple goals as they raise their daughter together.

Jake - age 30 - has emerged as a reliable ice hockey player. His glory began when he won 2014 Stanley Cup Championship for the Los Angeles Kings. Along with the club win, the athlete added another feather to his cap in 2015. The defenseman of Caucasian ethnicity helped his national team, Canada bring in gold at the 2015 World Championships.

Looking back at the athlete’s career, his rise began as he signed a five-year contract worth $20 million with Los Angeles Kings. The lucrative deal included an annual average salary of $4 million.

Although he was called on to play for Toronto Maple Leafs in 2019 as an exchange player, he remained bound in contract with Los Angeles Kings.