By LRU Writer | On: March 02, 2021
New York Giants' sixth-round pick in the 1995 NFL Draft, Jamal Duff had to cut short his footballing career because of a foot injury he suffered in his debut season. Never genuinely recovering from the injury, he hung up his boots following a single season with XFL outfit Los Angeles Xtreme... 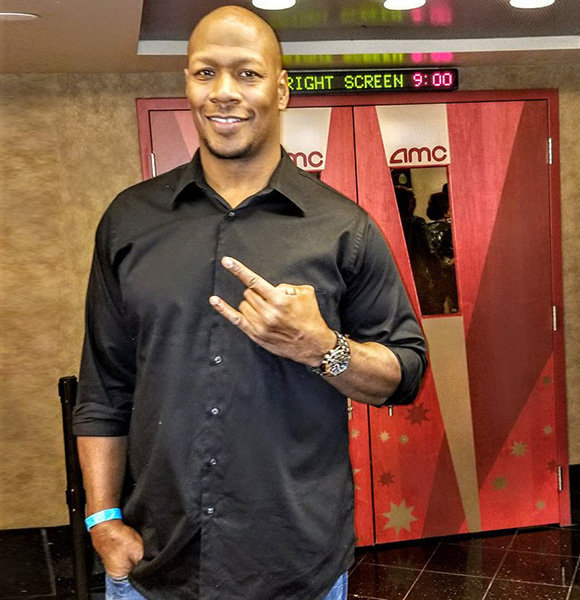 New York Giants' sixth-round pick in the 1995 NFL Draft, Jamal Duff had to cut short his footballing career because of a foot injury he suffered in his debut season. Never genuinely recovering from the injury, he hung up his boots following a single season with XFL outfit Los Angeles Xtreme.

When his NFL career saw an early exit, the Columbus Ohio-native opted to use his behemoth of physicality to secure roles in films and movies. Ironically enough, over the years, he is getting referred to as more of an actor than a former NFL player.

While his professional front has undoubtedly seen better days, is it true of his married life with - assuming if he has one - his wife? If not, is he dating a girlfriend? Could he be a closeted gay like the rumors suggest? Read along to find out!

Married With Wife Or Dating Girlfriends?; Any Truth To Gay Rumors?

Jamal is everything a woman looks for in a man; he boasts incredible presence - with the height & weight of six feet & seven inches and 285 pounds respectively - and comes with a deep pocket.

That said, there is no telling if he has a wife or plotting to get one as he has never truly opened up about his dating history in public platforms; be it social media or TV interviews.

A recluse when it comes to revealing about his married life, the former Washington Redskins defensive end's obscure online presence coupled with his lack of acknowledgment of girlfriends in interviews has made it almost impossible to get into the details of his personal life.

And, about the rumors of him being a closeted gay: if anything, it is plain stereotyping at its finest. Jamal, for his part, is yet to speak on the matter. Perhaps, his priority is his acting career at the moment and not the baseless gossips.

Before embarking on a trailblazing acting career, the Torque actor had less than a successful stint in the NFL.

On the back of an excellent tenure with San Deigo Stae University, Jamal made it to the NFL after getting drafted by New York Giants. An injury-laden debut season followed by an equally lackluster second year saw him register four sacks in total while playing 15 games.

His trade to fellow NFL outfit Washington Raiders provided a very little reprieve. By 1999, he was a free agent & still looking for a team to house him.

Not long after "retiring," the Foothill High School Alum, who was working as a graphic artist by then, tried his hands at acting. He has never looked back ever since. Working in classic movies such as S.W.A.T, The Rundown, The Marine, The Eliminator, and The Game Plan, Jamal has seemingly turned over new leaves, professionally. His acting credits on TV shows include CSI, The Wonderful World of Disney, Revenge, Scorpion, Marvel's Agents of S.H.I.E.L.D. and Brooklyn Nine-Nine.