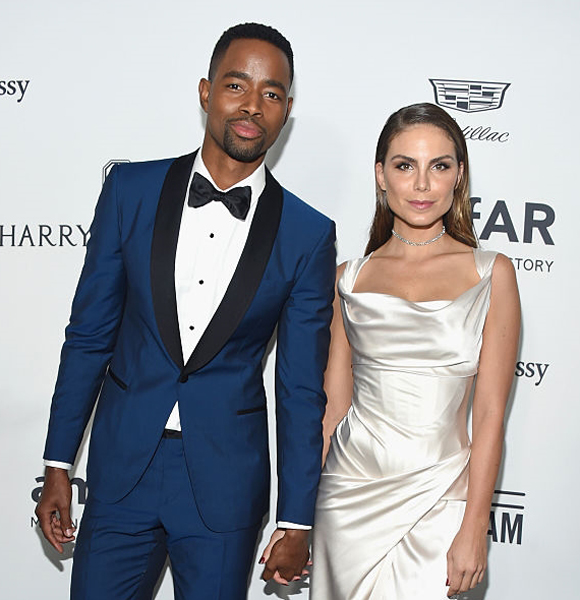 Famous Actor Jay Ellis’ love life and his nature towards his girlfriend. In addition to that, let’s learn more about gay rumors along with his dating and engaged life.

Who is Jay Ellis's Girlfriend?

As we say that love is blind and love knows no race and color, Jay falls for a beautiful Serbian model and girlfriend named Nina Senicar.

Fending off the gay rumors, Ellis is dating his girlfriend Nina openly, and according to some sources, the pair began their relationship in 2015.

Back in October 2015, Ellis and his girlfriend Nina made their first appearance as a couple at amfAR's Inspiration Gala. Though they are dating openly, they haven’t flaunted each other’s pictures on their respective social media accounts.

Earlier, the “Insecure” actor defended his lady love in an interview with Charlamagne Tha God on Power 105’s “The Breakfast Club.”

During the interview, the host, Tha God, asked about Ellis' swirly relationship with his model girlfriend. He even asked Ellis whether he is afraid of facing backlash regarding his relationship, as he has a large black female fan base.

“I am in a relationship. I’m in a very happy relationship and that’s where I leave it. I don’t really worry about anything else and that’s it. I think for me, we give so much of ourselves in what we do no matter what side of the industry we’re on so for me…a relationship for me is probably the most important thing that I think two people can have.”

Caption: Jay Ellis talks 'if cheating is justifiable' and gives few details about his relationship in an interview with The Breakfast Club (source: YouTube)

In an interview, Jay shared he is one-woman man and even shared that the qualities he is seeking in his woman.

Caption: Ellis shares what love means to him and talks about his dream woman (source: YouTube)

But the question arises; is Nina Senicar, his dream woman, with whom he was searching to spend the rest of his life? Will his partner be a perfect wife for him?  Will they get married? Only time will tell!

Well, time did tell us as the couple got engaged in 2019 and even share a daughter together.

Jay was born in December 1981. His father worked in Air Force, while his mother worked as a finance executive. Ellis is a graduate of Concordia University and has received Suma *** Laude.

Standing tall at the height of six feet two inches, Ellis has attained a commendable height of success in his profession as well.

The handsome and talented Ellis first gained reorganization for his appearance on the BET series THE GAME. He has then appeared in Masters of Sex, How I Met Your Mother, NCIS, Grace and Frankie, and Grey’s Anatomy.

With his hard work, dedication, and passion for his craft, Ellis has been able to accumulate a splendid net worth of $3 million.

Stay with us for further updates on Jay and Nina Senicar!