By LRU Writer | On: June 24, 2019
Jeremy Hellickson is a star Major League Player (MLB), athlete... shares a close-knit bond with his parents... attended Herbert Hoover High School, situated in... salary, which added to his multi-million net worth of... found another passion in girlfriend... wife prospect Natalie went through a trying... romance to that of a married couple, it wouldn't... 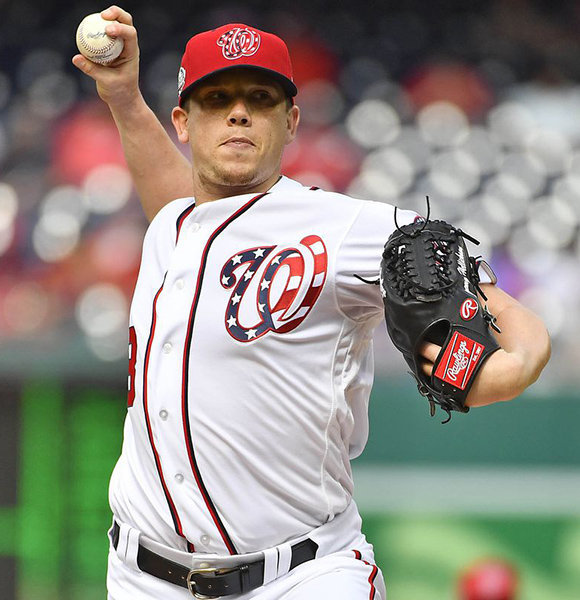 Nicknamed "Hellboy" by the Tampa Bay media, Jeremy won the mantel of "Rookie of the Year" following the explosive 2011 campaign. A year later, he outdid himself by winning the Golden Glove Award.

Back in 2010, USA Today's baseball experts awarded the star pitcher with its "Minor League Player of the Year" honor.

Jeremy shares a close-knit bond with his parents. They were supportive of his baseballing aspirations from the start.

During the 2011 MLB season, his entire family - including the parents - were in the stands to cheer him on as he faced against the New York Yankees, a side he supported as a kid.

32-year-old Jeremy was born in 1987 in Iowa to Steve Hellickson and his wife. He attended Herbert Hoover High School, situated in his hometown of Des Moines, and graduated from the same in 2005.

At six feet and one-inch (1.85) height and 86 kgs weight, Jeremy possesses all the making of a star athlete. Coupled with his baseball IQ, it made him a top prospect.

After five years in the minor league, Jeremy made his MLB debut in August 2010. Four years later, Tampa Bay Rays shipped him to rival Arizona Diamondbacks.

In 2015, the Iowa native got traded to the Philadelphia Phillies. Phillies then transferred him to Baltimore Orioles after two seasons. When the contract ended in 2018, he opted to sign with Washington Nationals.

With Nationals, Jeremy penned a year-long minor league contract. The deal guaranteed $1.3 million in salary, which added to his multi-million net worth.

Girlfriend Or Married With Wife?

With a reclining baseball career, Jeremy found another passion in girlfriend Natalie Cresta. The duo likely commenced dating way before the baseball pitcher got traded to Philadelphia Phillies in 2015. The MLB star and his wife-prospect Natalie went through a trying time in 2017. The car carrying the two got involved in a minor accident. Jeremy didn't bear any injuries, but the paramedics rushed Natalie to an emergency room.

With the tragedy, the yet-to-be-married couple's bond only strengthened.

Should the former Tampa Bay Rays athlete and his girlfriend upgrade their romance to that of a married couple, it wouldn't come as a surprise.

Natalie, an Iowa native like Jeremy, runs a personal blog. In it, she provides eager fans with the nuggets of the lovebirds' dating life. With birthday tweets and words of support via social media, she showcases wife-like mannerism.