John Salley's Wife Supports Vegan But What About His Spouse And Daughters? 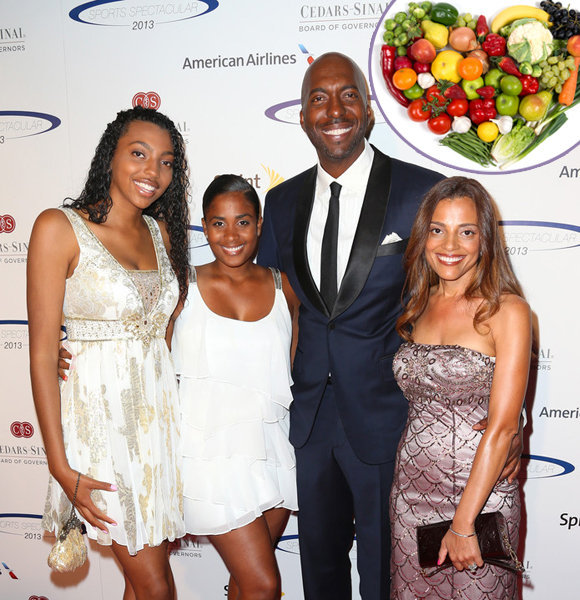 With a Supportive wife in all of his decisions, former NBA player John Salley has expressed his thoughts on opting for a vegan diet.

Also shares that he was previously a vegetarian, but an event in his life turned him into a vegan.

Caption: John Salley and his wife Natasha Ann Duff talk about being a Vegan in 2014.

In an interview back in November 2012, Salley revealed his reason for becoming a vegan and also shed light on the misconception among people about vegans.

John reasoned on becoming a vegan and shared an incident that proved to be a turning point for him.

Five years ago, I was doing a [public service announcement] for PETA [People for the Ethical Treatment of Animals] about being vegetarian, and all the food there at the photo shoot was vegan. I suddenly felt like eating anything from an animal wasn't good for me — I paid attention to what it was doing inside my body.

I also wanted my body and libido back from when I was 26, and I got them both. I went into raw vegan for a while, but I prefer cooked food, the way it smells, the way it feels going through your system.

Moreover, John also shared his sources of protein on a vegan diet he takes to stay in good shape,

"I get it from the same place the cows get it from: green, leafy vegetables. No one asks the cow or the chicken where it gets its protein. I eat about 4,000 or 5,000 calories a day, and I cook for myself. I also have a line of cooks that work with me — some raw, some vegan."

"In the morning, I eat organic grits ... and I have ginger tea with coconut oil. I eat a lot of kale, and I drink about half a gallon to a gallon of water a day. At night, I'll make pizza with almond cheese and different vegetables and seasonings; I put turmeric on everything."

Also, on being asked if he was still playing basketball full time, would he opt to become a vegan, he replied,

"If I had a vegan lifestyle when I was playing, I would still be playing. I'm just rebuilding my body now from all the wear and tear."

John even requested the Congress to increase the number of vegetarian options available to kids at school and highlight its importance.

"It was important working up on the Hill with the congressmen to convince them that these kids are the people who will be voting soon, and if all of them are sick and dying, there won't be any votes. There's no reason that America should be No. 1 in obesity; we have the greatest country in the world.

It's about taking care of your health — kids over the age of 5 do a lot of things from habit, and you can teach them about eating healthy and how important their food is."

"That we are all hippies. The biggest misconception is that it's like a political statement. It's not; it's just people who are conscious of what goes in their body and what happens in their environment at the same time. Also, for me, it's hard to not be an animal advocate."

John Salley married his wife Natasha Ann Duff in 1993 in a ceremony at the Blessed Sacrament Cathedral in Detroit. Adding to their happy family, the husband and wife also share two daughters together, Taya and Tyla.

John also parents his eldest daughter, Giovanna Salley, who was born from his previous relationship. In an interview in 2016, John promoted veganism with his children as well as shared an incident of his daughter’s childhood.

Caption: Salley sharing a memorable incident of his daughter's childhood in May 2016.

My oldest Daughter GIOVANNA .. Beauty and Talent.. I Love U GiGi;)

John has been persistently vocal and persuades people to adopt a vegan lifestyle to become healthy following the death of three NBA players due to heart attacks; in an article, John was called a warrior for preaching a health message.

A professional basketball player, Salley was the first to play three different winning franchises. He started his career officially in 1986, after selection as the 11th overall draft pick for “Detroit Pistons” in NBA Draft and played for them from 1986 until 1992 and won two NBA championships in 1989 and 1990.

In 1992, he was traded to “Miami Heat” and later on signed Chicago Bulls and won the third NBA Championship in 1996 before retiring.

Post-retirement from his basketball career, John's movie appearances include "Bad Boys," "Bad Boys II, "Coast to Coast," "Eddie, "I'm a Celebrity…Get Me out of Here!", "He's a Lady," "Confessions of a Shopaholic," and "The Ultimate Christmas Present."

With his hard work and dedication in his NBA career and reinventing himself in movies, he has accumulated a net worth of $14 Million, according to Celebrity Net Worth.

Witnessing the star's happy married life with his wife and amazing career, we cannot wait to update you guys more on him!