Who Is Jordan Clarkson Dating? Player With One Too Many Rumored Girlfriends

By LRU Writer | On: March 06, 2018
Who Is Jordan Clarkson Dating? Player With One Too Many Rumored Girlfriends. People usually take their time finding the ideal person, and at times, it may even require them to jumble from one relationship to another in search of a perfect match.The Filipino-American basketball star, Jordan Clarkson has been facing the similar scenario, as he is also going back and forth from one relationship to another. 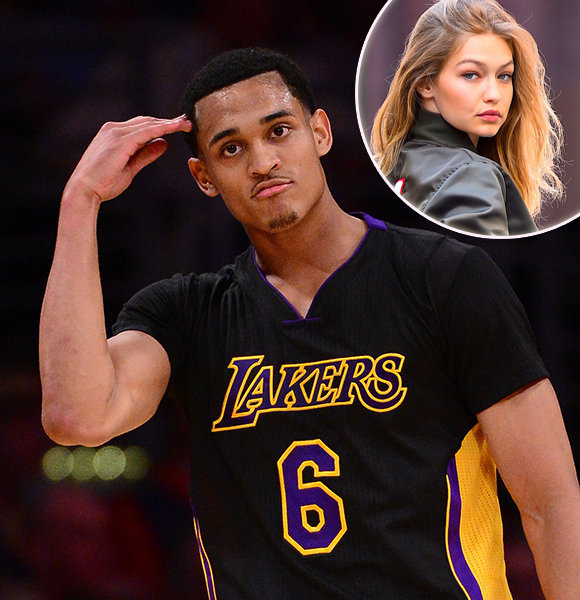 Stumbling upon the right partner isn't always easy as it seems. People usually take their time finding the ideal person, and at times, it may even require them to jumble from one relationship to another in search of a perfect match.

The Filipino-American basketball star, Jordan Clarkson has been facing the similar scenario, as he is also going back and forth from one relationship to another. With his talent and great physique, Jordan has made the ladies go crazy over him, who has shown a lot of curiosities regarding his current relationship status.

Want to know whom Jordan is dating now? Well, keep reading to find out!

The rising star of the NBA, Jordan Clarkson is reportedly assumed to be dating the beautiful and ravishing model Bella Hadid. On December 12, 2017, the pair hung out in L.A after a match between the lakers and the New York Knicks. Afterward, they even went to an on-trend, the high-end Japanese restaurant named as Zuma along with friends, Brandon Ingram, Hailey Baldwin, Camila Morrone, Justine Skye, and other pals. Since then the couples are said to be hanging out frequently.

However, neither of the duos has quoted out openly about their relationship. But, on 11th January Bella responded to one of the posts of Perez Hilton that accused her of dating Jordan via twitter. Replying to the tweet, Bella directly questioned, "I am?" along with a confused face emoji.

Though there have been plentiful speculations and considerations, the exact truth about the relationship between Jordan and Bella has not surfaced out. So, it is yet not sure, whether or not Jordan is dating the fashionista, Bella Hadid.

Anyway, this is not the first time for Jordan that he is romantically linked to a woman. Previously in 2017, he was rumored to be dating the ‘Famous In Love’ star, Bella Thorne, after the duo were seen together spending quality time at Six Flags Magic Mountain on 4th May. Bella and Jordan were hopping on roller coasters and playing the carnival games.

Earlier the same year, in January 2017, Jordan was dating the beautiful model, Hailey Baldwin. The two went on a date on a Thursday night to one of the hottest restaurants in L.A and were even spotted walking hand in hands. Later, in April the duos also attended the Peppermint Club to celebrate twins Simi and Haze Khadra's birthday at a space rodeo themed party. Though their dating rumor was buzzing in the media, more information and their confrontation regarding their relation never surfaced out.

Apart from the alleged affairs, Jordan was in a low-key relationship with the outstanding beauty Kendell Jenner in 2016. Both of them were seen together at the Beverly Hills Hotel and Bootsy Bellows' "Red White and Bootsy" party. According to the E! News, Jordan was even spending time with Kendall at her house in Malibu. But just like the others, the news of Kendall being the girlfriend of the player also faded away when Kendall moved out with the famous American rapper, "ASAP Rocky." Besides, making headlines for having a fluctuating love life, Jordan is also the talk of the town for his basketball playing skills. His parents have always supported him to be a basketball player since his school days.

Further, throughout his college life in Tulsi and Missouri, and his career as an NBA player, Jordan has been mesmerizing his fans and teammates through his basketball playing skills.

As for now, Jordon recently got traded to the Clevland Cavaliers from Los Angeles Lakers and has a contract that rounds up his base salary, a cap hit to be $11,562,500 along with a dead cap value of $37,500,000.