By LRU Writer | On: February 28, 2019
British Actor Jude Law is offically off the market -- now that he's an engaged man...Dating since May 2015, Jude and his wife-to-be Philipa have already begun to plan their wedding... 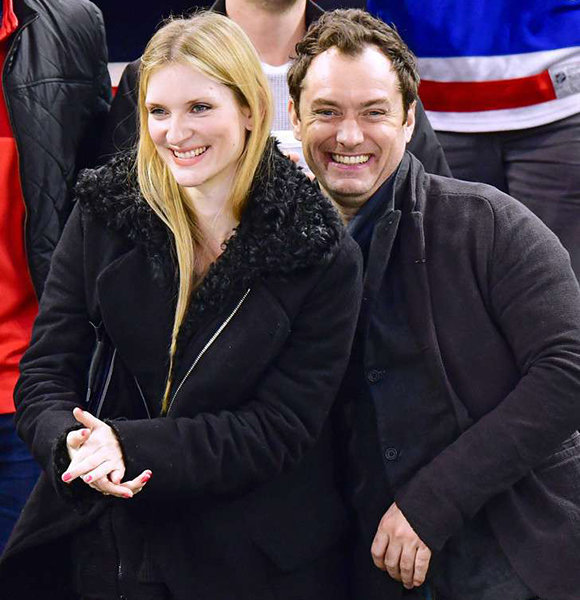 British Actor Jude Law is offically off the market -- now that he's an engaged man!

With his rumored fiancee Philipa Coan flaunting a diamond ring, the engagement between the lovebirds is all but confirmed. Dating since May 2015, Jude and his wife-to-be Philipa have already begun to plan their wedding.

When the Captain Marvel star's girlfriend Philipa stepped out her residence in North London on 27th February 2019, the world - including the paparazzi present there to take snaps - looked in amazement as she sported a never-before-seen diamond ring. Jude Law's fiancee Phillipa Coan dazzles the world with a sparkling diamond ring outside her residence in North London in Feb 2019 (Photo:- usmagazine.com)

A couple of days earlier, the media outlet The Sun had broken the news of the duo getting engaged. Per the report, Jude, age 46, and his girlfriend-turned-fiancee are planning a wedding in France, scheduled for May of 2019.

Talking to The Sun, a source close to the engaged duo revealed that the wedding is going to "be a good old fashioned knee up with plenty of booze and dancing." They expect all their friends from back in the day to be present at their upcoming marital ceremony.

The news of Jude getting engaged to Philipa comes just a month after the actor referred to his then-girlfriend as his partner. To those unfamiliar with the pair's dating history, they have been publically dating each other since May 2015 after stepping out as an item at the Hay Festival. Jude Law steps outside with his then-girlfriend Phillipa Coan in May 2014, a few days after debuting (Photo:- Laineygossip.com)

Should the wedding take place at the projected date, it will mark Jude and Philipa's fourth year together and the former's second marriage.

Before his present fiancee, the Sherlock Holmes actor was in a marital relationship with Sadie Frost. Married for almost four years, Jude and his ex-wife share three children: Rafferty, age 22, Rudy, age 16, and Iris, age 18.

Likewise, he shares a child each - Sophia, age 9, and Ada, age 3 - with his ex-girlfriends Samantha Burke and Catherine Harding respectively.

While Jude's exes are "industry people," his wife-to-be Philipa's the exact opposite; so much so that she hasn't even watched a single Marvel movie.

A Business Psychologist by profession, Phillipa at age 32 is a top-notch prospect in her field. Employed at STRIDE since October 2015 at present, she previously worked for Work Psychology Group Ltd.