By LRU Writer | On: September 10, 2019
Julio Jones is surrounded by his ever-growing stature as an... the wide player also steered a flurry of controversy when the internet was full of his dating rumors with a possible girlfriend... was spotted appearing in NBA matchups pairing with the lovely singer... these rumors also turned out fake as the model confirmed the whole story is... 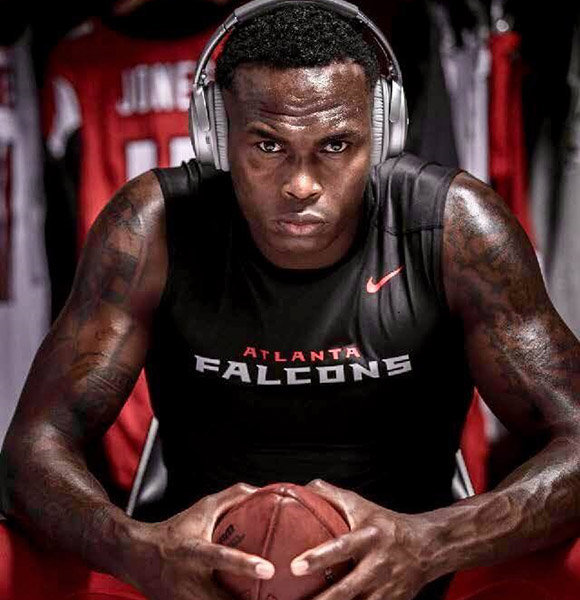 Julio Jones is famed for his ever-growing stature as an NFL wide receiver.

The Atlanta Falcon superstar is no stranger when it comes to appearing on the front cover as he has put up some match-winning performances playing for his team.

The five times Pro Bowl invitee is also the record holder for the highest average receiving yards per game in NFL. Known mainly for his radiating NFL career, Julio is a very intimate person in real life.

However, the superstar has left back trail of a few relationships which can are further elaborated below.

Julio Jones was born in Foley, Alabama on 8 February 1989. While Julio was still in his mother’s womb, the NFL superstar was thought to be a girl, so his mother named him Quintorris Lopez Jones.

As days passed by, his mother called him Julio and the name got stuck to him. While many know Julio by his game, he is a very private person. Though he does not talk about his relationship, the bloke does not shy away from sharing details about his family.

Admittedly, his dad abandoned the family when Julio was only five, but his mother raised him and his older brother Phillips as a single mom. Now, that Julio is a success story, he wants to give all the happiness to his mother than to a wife.

Julio Jones spearheaded many fantastic attacks for his team in the football field. But, the wide player also steered a flurry of controversy when the internet was full of his dating rumors with his possible girlfriend, Jasmine Villegas.

In 2017, Julio had raised eyebrows when he was spotted appearing in NBA matchups paired with the lovely singer. The two shared a short period of the limelight when they provoked a love rumor with each other.

As both the party did not put a light in their relationship, Jasmine never surfaced as his girlfriend. While Jasmine was well off onto a new relationship, Julio’s personal life was still under a dark cloud.

Then in 2018, there was a glimmer of hope when Julio was speculated to be dating Michelle Rodriguez - not the Fast and Furious actress - in early January. But, that chance was also erased as the actress got engaged-to-be-married to another NFL star, Ryan Shazier.

The same year, the receiver slurred a relationship with the Instagram model, Kaylar Will. This time it was more than a piece of dating news. According to some sources, Julio was recognized as the father of Kaylar’s upcoming baby.

Having said that, the pregnant rumors also turned out fake as the model dismissed the whole story as made up via her Twitter.

Now, that all the news turned out to be fake, Julio does not have any girlfriend as of late. He probably has to put in more efforts to find a suitable wife and get married.