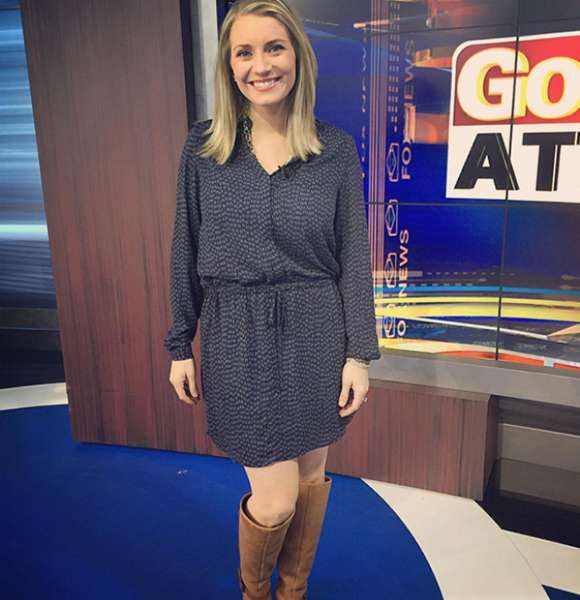 Katie Beasley is an American news personality, and a traffic reporter for Fox 5's show Good Day Atlanta. She is also the receiver of two awards associated with journalism; Georgia Associated Press Award and Georgia Association of Broadcasters Merit Award.

Katie was born on 13th April 1986 in a family of two children. She is the only daughter in her family as she had a younger brother. With her sibling, she grew up in Cherokee County.

Sadly, her younger brother committed suicide in 2016 due to the struggle with depression and addiction.

Katie, who has a height of five feet and three inches (1.6 meters), was keen on pursuing a career in Journalism since her high school days.

She first co-anchored her elementary school's news when she was in the fifth grade. Later, she graduated from the University of Georgia with a B.A in Broadcast News Journalism.

After graduating, she worked for News12 as a co-anchor on the show First at Five. During her tenure in News12, one of the high school show she was actively involved became an award-winning show.

In 2013, she left her job to work at Fox 5 News channel as a traffic reporter.

Since then, Katie has become a morning highlight of the network where she can be seen early at 4:30 A.M. Through her show Good Day Atlanta, she reports on the ongoing traffic at Atlanta, Georgia.

She has also become a reliable source of information and a go-to person among viewers to gather various information on the traffic updates on Atlanta and its surrounding area. Furthermore, she earns a handsome salary of about $75,000 annually.

Katie, who is 33 years of age, has been happily married to her husband, John Davis. Although they married one another in 2013, the pair had been dating one another since their high school.

As of now, they reside in Forsyth County, Georgia, with their two children. Coincidentally, their eldest daughter Ava was born in October 2016, and thier son Cole Davis was born in 2018 during the same month. Ava finished her preschool, and Cole will be a year old in a few months.

The loss of her brother has left a big hole in Katie's heart. So, she uses her platform as a TV personality and a sister of a suicide victim to raise awareness on mental health, and suicide prevention.

Dead By Suicide:- Jennifer Ashton's Husband Dies After Committing Suicide; Gave A Tribute From Her Side

Moreover, she still gives birthday wishes to her late brother in his remembrance.

Although Katie has been through tough times in her life, with the help of her supportive husband and beautiful children, she’s holding onto the better days that lie ahead of her.