By LRU Writer | On: June 11, 2019
Katie Nolan is the host for Always Late with Katie Nolan on the TV network ESPN...was born on the 28th of January 1987...is a resident of Boston, Massachusetts...has been a subject of many rumors...her relationship status remains under the wraps... 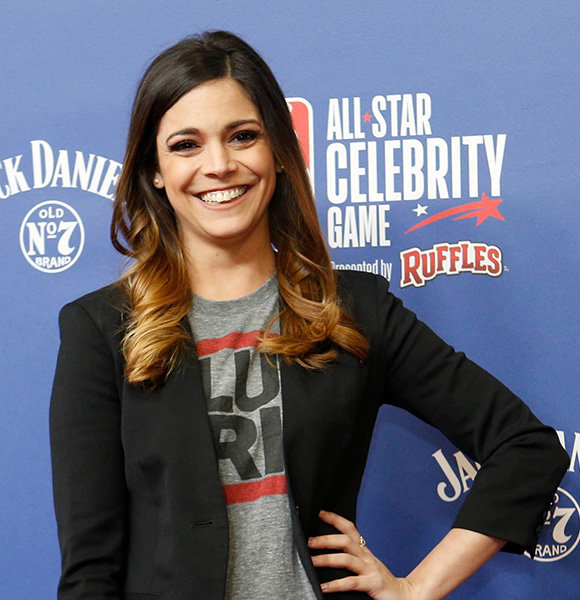 Katie Nolan is the host for Always Late with Katie Nolan Show that airs on TV network ESPN. She is known for Speed Round, Pitch, Monday Morning Monologue and Sports Limerick of the Day.

She previously worked in the FOX Sports' weekly series of Garbage Time With Katie Nolan. Besides being a TV host, Katie is a writer, director, and actor.

However, Katie is not just all work and no play.

She is a fun-loving person, and it's one of the traits that people adore of her so much. She is the proud owner of a Guinness World Record, for stacking the most doughnuts in a minute while being blindfolded. Precisely, she stacked seven doughnuts.

Katie Nolan was born on 28 January 1987. She is a resident of Boston, Massachusetts, the USA since her childhood.

Katie is an American by nationality, but, her ethnicity remains a thing in the dark as there is no detail on her parents. However, what is know is her siblings. Katie has a sister and an older brother named Kelvin Nolan.

A graduate of Framingham High School in Massachusetts, Katie holds a degree in Public Relations from Hofstra University since the age of 22. Katie Nolan with her parents on 10th of November 2015 (Photo: Katie Nolan's Instagram)

Katie is a beauty of a woman. The gorgeous blonde stands tall with a height of 5 feet and 5 inches (1.67 m).

Is Katie Single Or Dating?

Like the details on her parents, Katie also keeps her personal life under the wraps.

Being a celebrity, she has been a subject to many dating rumors, but, none of them have been made on solid ground.

Back in 2012, she was romantically linked with an American actor Kevin Connolly. Their relation came into question when they were flirting on twitter. However, it turned out to be just friendly banter.

Nevertheless, Katie does joke around about her relationship. Her social media has many mentions of a partner; sometimes, she gushes about her boyfriend, and sometimes her husband.

On 21st of November 2015, the TV host posted a screen capture of a conversation and claimed it to a text between her boyfriend and his friend. Similarly, via Twitter on 18th of July 2018, she mentioned Mo salah, the Liverpool forward football player to be her husband.

There are several accounts of such activities on Katie’s social media, but, it is unsure if she means a thing or not. Whatever the case may be, fans will have to wait for her to reveal any details on the matter. Who knows? She could be engaged with someone or already married!