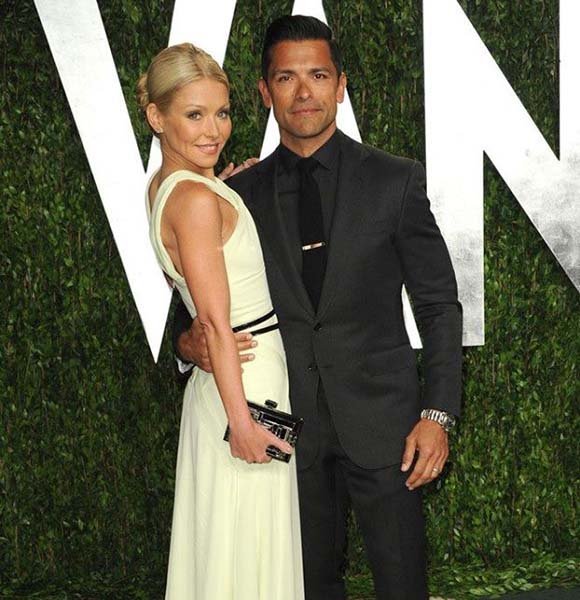 American actress and TV personality Kelly Ripa is best known for her roles as Faith Fairfield in the comedy series Hope & Faith (2003-2006), and Hayley Vaughan on All My Children (1990-2010).

Apart from that, she is also widely recognized as the co-host of morning talk show Live! with Regis and Kelly (1991-2020). For her work as host in the talk show, Kelly has won the Daytime Emmy Awards six times.

The two met in 1994, while Mark was auditioning for a role on All My Children. Mark got the part and was cast opposite Kelly as her love interest.

More About Kelly And Mark:- Mark Consuelos' Wife Reveals Much About Their Married Life; A Perfect Family Holders

Slowly, the on-screen romance developed into an off-screen friendship and then much more. The two eventually started going out. After dating for a short time, Mark proposed to Kelly.

Following the proposal, the couple eloped to Las Vegas and got married on 1st May 1996. On her wedding day, Kelly wore a $199 dress that she purchased on stock clearance.

Mark was born on 30th March 1971 in Zaragoza, Spain, to an Italian mother and a Mexican father. But he grew up living in Italy and the United States.

Kelly and Mark are parents to three kids. Their eldest son, Michael Consuelos was born on 2nd June 1997. Michael is the godson of actors Chris Bruno and Eva LaRue. And their youngest son Joaquin Antonio Consuelos was born on 24th February 2003.

Michael also has some acting credits on his name. He portrayed the role of his father, Mark's character, Hiram Lodge's younger self in CW's hit Riverdale (2018).

Her parents are Joseph Ripa and Esther Ripa. She boasts mixed Italian and Irish ancestry from her full Italian American father and her Italian and Irish mother. Kelly grew up alongside her younger sister Linda Ripa, who is an established children's book author.

Kelly Ripa boasts a gorgeous body standing at the height of 5 feet 2½ inches (1.59 meters) with a complementing weight of 50 kg (110 pounds).

Further, she also follows a strict diet. Her mornings usually start with a cup of cappuccino made by her husband. After coffee, she takes her breakfast only after completing her morning talk show, usually after 10 a.m. At breakfast, she goes for yogurt, granola, and berries. Her lunch and dinner are typically simple homemade dishes.

Further, she also disclosed that she tries to include more fresh foods in her diet and stays away from processed and junk foods as much as possible.