By LRU Writer | On: October 21, 2019
Filipina-American model Kelsey Merritt rose to fame after...the world knows her today as a...beauty from her mixed race-ethnicity...As a matter of fact, Kesley has been dating...Kelsey’s freckled face, pouty lips, and protruding eyes have helped her 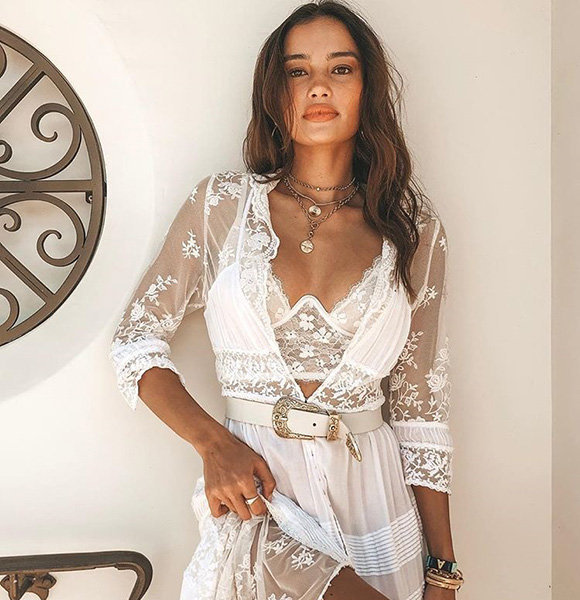 Filipina-American model Kelsey Merritt rose to fame after appearing alongside fellow model Gigi Hadid in a Maybelline cosmetic advertisement. Then, she created history in 2018 by becoming the first Filipina to walk the ramp in the lingerie spectacular for Victoria’s Secret Fashion Show.

In an interview in 2018, she proudly gushed on landing on her dream job,

“I couldn’t believe it. I still can’t believe it. I’ve been modeling for almost six years now and this has been a goal of mine from the start. The competition is so tough here in New York; I could only dream of working with VS.”

Not just VS, but Kelsey has endorsed brands like Palmolive, Maybelline Philippines, and Kashieca. She has also signed with agencies all around the world, including Supreme, Women Management Milan, Wilhelmina, and Nomad.

VS Star's Family And Ethnicity

Kelsey was born on 1st October 1996 in Pampanga, Philippines. She gets her distinctive feature and beauty from her mixed race-ethnicity. Her father, Philip Merritt, has an American ancestry, and her mother is of Asian descent.

The supermodel is close to her family and frequently posts pictures with the family on her social media. As an illustration, she posted a picture with her parents at the end of 2018 from New York, New York, having quality family time.

Kesley also has two sisters Kirsten Alexandra and Keagan Merritt, and a brother Kyle Merritt. She has a good connection with all her siblings.

With the support of her family and the whole Philippine island rooting for her, Kelsey sure makes her parents and country proud in an international modeling arena. The slim built beauty has a height of 5 feet 8 inches, which is equivalent to 1.73 m and a weight of only 119 lbs.

She sure maintains her body via regular workouts with a healthy and balanced diet. Interestingly, Kelsey was the captain of her volleyball team in high school. Further, she graduated with a degree in Communications from Ateneo de Manila University in Quezon City, Philippines, in 2017.

Is Kesley Dating? Has Boyfriend?

Sorry, Guys! The beautiful Kesley is not available.

As a matter of fact, Kesley has been dating Olympic Gold winning swimmer Conor Dwyer since the mid of 2018. She timely shares romantic pictures with the 6 feet 5 inches (1.96 m) tall, Conor on her Instagram.

The beautiful couple is going strong as they spark more romance in the air.

There are pictures of the couple from the 2019 Valentine's Day post, where the couple is in each other's arm, and another one kissing passionately in 2018. Those social media exposure confirms that they are madly in love, and it won't be long until the duo steps it up to tie the knot.

Not just the alone time, the couple are also spending time with each other's family and friends. The duo also posted a picture of having fun together with their friends and family of their trip to Disneyland on 23rd September 2019.