By LRU Writer | On: November 25, 2019
For the people who watch the show Strictly Come Dancing definitely know the handsome hunk named Kelvin Fletcher. He is the one who replaced Jamie Lang in the show’s 2019 season as Jamie was forced to withdraw after getting injured...The Emmerdale actor, in 2014, shared with The Sun newspaper that all the saucy comments and messages on Twiter are from gay men...Furthermore, his family consists of...Kelvin Fletcher was born on...he has amassed a total net worth of... 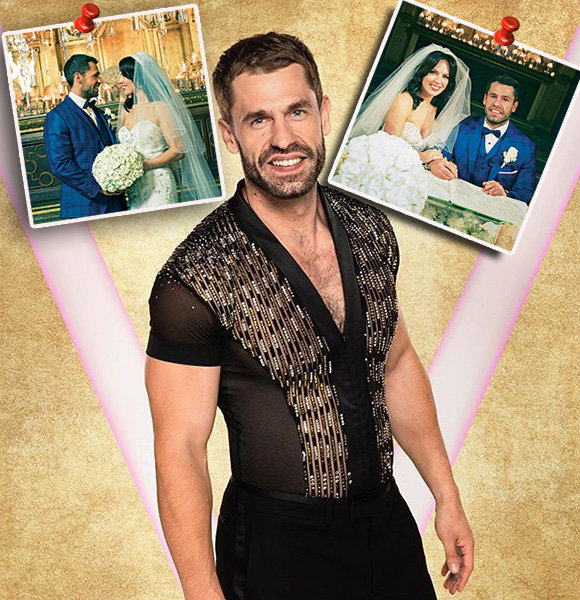 Fans of the show Strictly Come Dancing are aware of the handsome hunk named Kelvin Fletcher. He is the one who replaced Jamie Laing in the show’s 2019 season as Jamie was forced to withdraw after injury.

While Kelvin is best known for appearing as Andy Sugden in the TV series titled Emmerdale, the fact that the actor took ballet lessons as a child might come off as a surprise to some.

His dance classes paid off in return as Kelvin, along with his partner Oti Mabuse, rocked the stage with their burning hot performance.

Is Kelvin Gay Or Married To Wife?

The Emmerdale actor, in 2014, shared that all the saucy comments and messages on his Twitter were from gay men. It was due to his attractive looks that people often assumed him to be gay. But, in reality, the dancing star couldn’t be more straight.

He is a married man, who had tied the knot with long-time girlfriend Liz Marsland back in November 2015. The couple had first met when they were children but did not start dating until they met again as adults. After dating for nearly eight years, the pair finally decided to upgrade their relationship as husband and wife.

Their wedding ceremony was held at London’s One Mayfair with all their loved ones happy and excited at the couple’s big day. Kelvin Fletcher and wife Liz Marsland at their wedding in November 2015 (Photo: hellomagazine.com)

Other than the dreamy wedding, Kelvin and his wife are also blessed with two beautiful little children in the family. The couple's eldest child is a girl named Marnie, followed by her brother, Milo.

So, Kelvin's family is visible proof that he is not gay, regardless of how many people want him to be.

After watching his dance sessions on Strictly Come Dancing with Oti Mabuse, a lot of people were left wondering if the dance-partners had something between them. But, Kelvin claimed that people believing a romance was budding meant that they were doing their job correctly.

“If you’ve not bought into it then there’s something missing. So I absolutely expect, and I hope, that people watch me and Oti and see whatever narrative it is — whether that be that we’re in love — I want people to believe it.”

However, to check back with the reality, Kelvin’s wife Liz is entirely supportive of the actor’s involvement in the show. Further, Kelvin explained that he is happily married to his wife.

It looks like there is no affair going on with the dance couple after all.

Kelvin Fletcher was born on 17 January 1984 in Lancashire, England. The five feet and nine inches (1.75m) tall actor is famous for TV shows like Three Seven Eleven, The Shore, and Emmerdale. As of 2019, he is seen in the reality TV show, Strictly Come Dancing.

You Might Be Interested In:- Lisa Riley & Musician Partner Soon To Get Married! Spills Future Husband Details

With such popularity and success in his career, Kelvin has amassed a total net worth of $5 million.