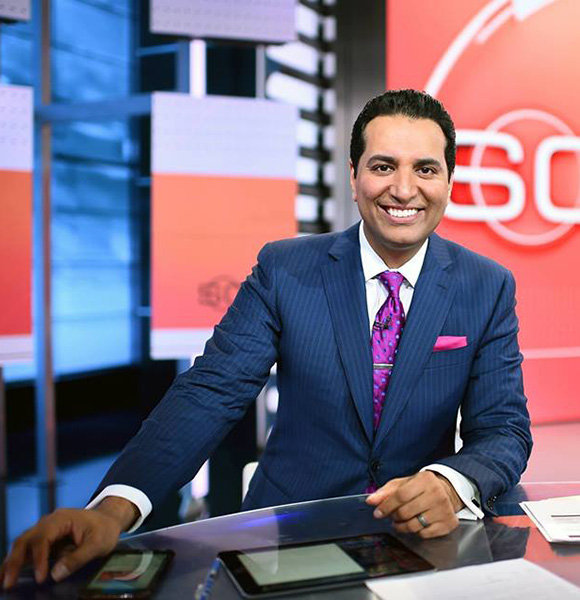 Kevin Negandhi is an American Sportscaster and a TV host. He is best known for appearing on the 6 p.m. ET SportsCenter.

However, he is not just limited to the one show of ESPN; he has worked in College Football Live, NFL Live, Baseball Tonight, and NBA Tonight. He was also the one to present the 2015 Special Olympics World Games.

Kevin Negandhi was born on the 20th March 1975 in Phoenixville, Philadelphia, United States.

Regarding his background, Kevin comes from a family of an Indian father and an American mother. Therefore his ethnicity is Indian-American whereas his nationality is American.

As for his education, he completed his studies in his home town at the Phoenixville Area High School in Phoenixville.

Later on, he enrolled in the Temple University and graduated with a degree in Communication in 1997. With his great academic stride, the university included him in the Media and Communications Hall of Fame.

Similar to his professional life, Kevin has been successful in his personal life too.

Kevin fell in love with someone also involved in Journalism; a news and investigative reporter, Monica Buchanan. After years of dating, the pair finally tied the knot on 8th of March 2009.

After three years of being in a happy married life, the couple was blessed with a bundle of joy.

They welcomed their first child, a son named Brandon Arjuna Negandhi on 8th of May 2012. The pair became parents to two more children; a son, on the 18th of March 2014 and a daughter in August of 2016. After a decade and three children, their love has grown stronger for each other.

There is no doubt that the family of five have a healthy relationship. Now and then, Kevin boasts his successful marriage whenever he can. On 7th of March 2019, he shared a photo of himself and his lovely wife on his Instagram, celebrating their 10th anniversary.

Sportscaster's Career - Where Is He Now?

Kevin pursued a career in his academic background, and in the long run, it was the best decision he could have ever taken.

He began his career in 1995 as a college stringer at USA Today. He soared to new heights when he worked as a sports director at WWSB-TV in Sarasota, Florida. In 2004. While working there, he managed to bag three Associated Press award; Best SportsCast (2004,2005) and Best Breaking Sports News (2005).

He joined ESPN in 2006 and worked as an anchor for the 6 p.m. ET SportsCenter.

He later became a member of the ABC College Football studio team on 2017. With his time with the media giant, the sportscaster enjoys a comfortable life with his family. Although his salary is not disclosed, ESPN has undoubtedly given a boost to his net worth. Certainly, the host is paid more than the average salary of $55K.