By LRU Writer | On: October 14, 2019
With a soulful vocal delivering over a warm atmospheric synth production, King Princess started her fame-filled journey from a very young age of...King Princess, whose real name is...came to be a young music prodigy when...she is estimated to have an estimated earning ranging from...her total net worth is...confirmed she is dating... 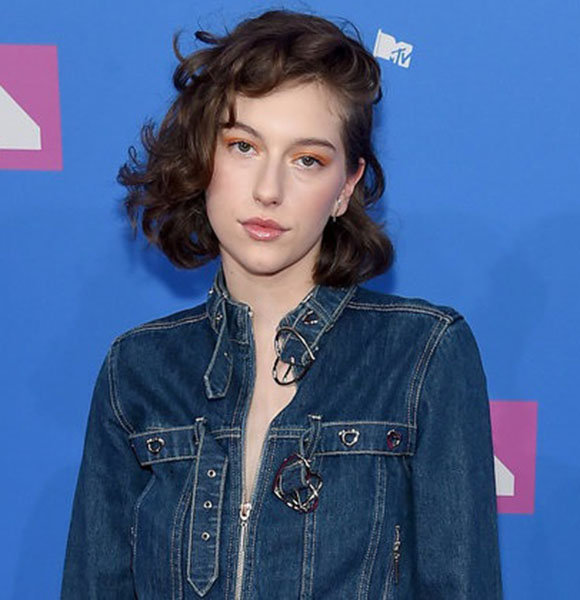 With a soulful voice and talent for playing multiple instruments, King Princess started her fame-filled journey from a very young age of 11.

Since her debut, the singer has released various songs over the years, continually delivering fans with a series of pop music.

On top of that, as an openly gay artist, King Princess has been able to reach out to the hearts of the LGBTQ community as well.

King Princess got some spotlight in her dating life. The openly gay singer confirmed her dating status during an interview on 9 September 2019. But, she did not disclose the identity of her partner.

Some rumors hint towards a possible relationship between King and Lizzo's creative director, Quinn Wilson.

King's alleged girlfriend also posted a picture with the caption “I lauv ♥ï¸” that indicated a romance. The singer, in turn, posted a photo of her kissing Quinn.

Although the pictures indicate that the two are in a relationship, neither King Princess nor Quinn has confirmed their affair officially.

Before Quinn, King Princess dated actor Amandla Stenberg. Princess confirmed the relationship at an interview in 2018. King Princess was Amandla’s first lesbian crush as she came out as gay in June 2018. The date of the former couple's split remains a mystery. Amandla is not the only partner King Princess has dated. At one point, she dated a guy who came to her Philly Show in January 2019 to support her. She even posted a picture of the two together the next day, claiming she was sorry about being gay.

King Princess (real name: Mikaela Straus) was born on 19 December 1998. She grew up with a little sister in a family and was raised by her father - who owned a studio called Mission Sound. The singer and her parents have a secure connection as she often talks about them on Twitter.

Princess was already a music prodigy at the mere age of 11 as was offered a record deal by a famed music company.

The Brooklyn native later tried learning music at the University of Southern University. But, Princess dropped out after a year to pursue a full-time career as a musician.

King Princess published different songs such as Send Pix and Sunburn early on in her career. Her breakthrough happened in 2018 when she published a song titled 1950. The song was her first release for Mark Ronson’s Zelig Recordings label. Her second single, called Talia, soon followed it.

Both of her songs made it to her EP called Make My Bed, which was published in 2018 as well. Apart from these songs, Princess has released singles like Pussy Is God and Cheap Queen, including a cover of the song, Femme Fatale. She also published the hit I Know, collaborating with Fiona Apple.

With her songs being published mostly on her official YouTube channel, the young artist is estimated to have an income ranging from $3.7K - $58.5K per year. However, her total net worth is not known to the public.