By LRU Writer | On: February 06, 2020
The name Kirk Douglas needs no introduction...was active onscreen since the 1950s...lost his life at the age of 103...after the news of his death...connection he shared with his wife of more than six decades...his children...estimated net worth of...birthday on 9th December...of his top movies include...came from a low-income family and a poor neighborhood... 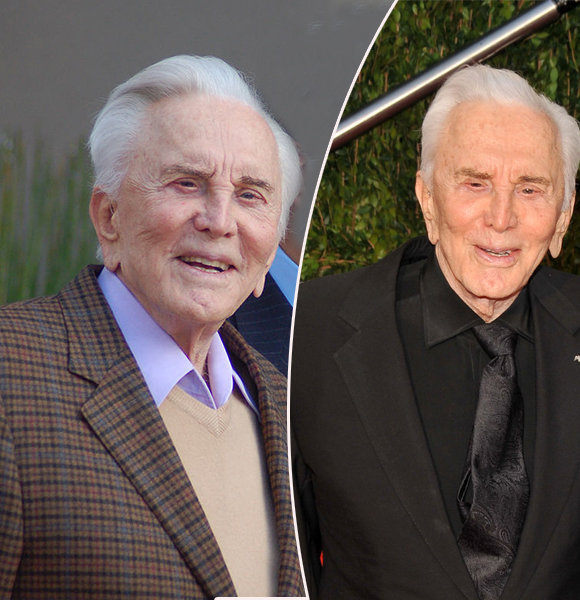 The name Kirk Douglas needs no introduction. The late actor, who was active onscreen since the 1950s, came from the ghettos. But, through acting, he rose to become an actual superstar legend filling his life with fame, recognition, and wealth.

Unfortunately, on 5th February 2020, Kirk lost his life at the age of 103. His son, Michael Douglas, confirmed the news to People magazine through a statement that read,

It is with tremendous sadness that my brothers and I announce that Kirk Douglas left us today at the age of 103. To the world, he was a legend, an actor from the golden age of movies who lived well into his golden years, a humanitarian whose commitment to justice and the causes he believed in set a standard for all of us to aspire to.

...But to me and my brothers Joel and Peter he was simply Dad, to Catherine, a wonderful father-in-law, to his grandchildren and great grandchild their loving grandfather, and to his wife Anne, a wonderful husband.

Kirk Douglas was born on 9th December 1916 at Amsterdam, New York, as Issur Danielovitch Demsky. He was born to Bryna (Sanglel) and Herschel Danielovitch, who were Jewish immigrants from Chavusy.

Though Kirk came from a low-income family and a poor neighborhood, he always excelled in his studies and was a strong athlete.

During his time at St. Lawrence University, he used to wrestle competitively. But, when he realized that an acting scholarship could potentially be an escape from his ragged life, he found himself entering into the American Academy of Dramatic Arts with the said scholarship.

Through the academy, Kirk started his career in acting. However, he was only seen in some small Broadway shows before he joined the United States Navy in 1941 and served his nation during World War II until 1945.

He went back to working in the theater and eventually went on to become Hollywood’s one of the most cherished actors.

Kirk was also known for the strong connection he shared with his wife of more than six decades, Anne Buydens. Kirk Douglas and his wife Anne Buydens were happily together for more than six decades (Photo: medium.com)

The two first met in Paris in 1953 on the sets of the movie, Act of Love. Though Anne declined Kirk’s approach, they eventually got together and tied the knot on 23rd April 1954.

They had two children together: Peter Douglas and Eric Douglas; Eric met a tragic and untimely death when he was 46 years old.

Other than Anne, Kirk was married to Diana Douglas from 1943 to 1951. The former couple shared two children: actor Michael Douglas- who has a son named Dylan Douglas- and Joel Douglas.

As a celebrated actor in Hollywood, Kirk Douglas played in numerous movies and even earned several Oscar-nominations.

From working in the movie world for a long time, he collected a total net worth of $60 million.