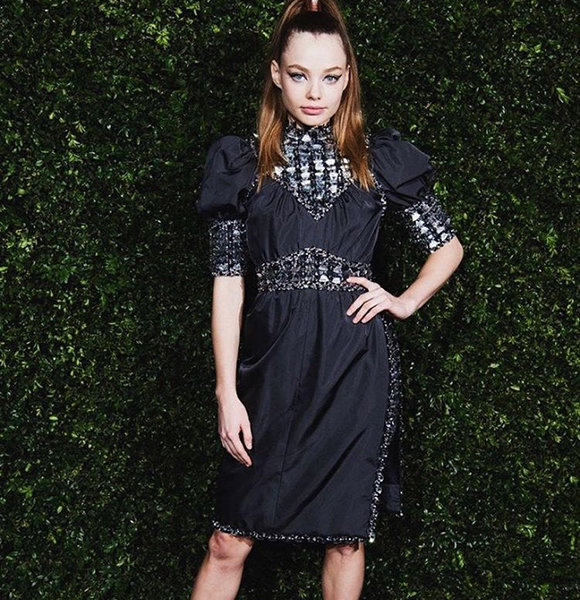 Boasting a height of 5 feet 7 inches (1.7m), Kristine Froseth is an actress and model by profession. Her first modeling gig was for magazines, she appeared on the cover of Harper's Bazaar in 2016.

She worked on movies, and different TV series after her modeling debut. However, it was not until 2018, Kristine rose to fame with her appearance on the trending Netflix series, Sierra Burgess Is a Loser.

She also amassed quite a popularity in 2019, with her appearance on Weekends' music video False Alarm.

Keeping her love life private, Kristen has never revealed any information about her personal life. With not much information about a boyfriend and no social media appearance of a partner, it is safe to say that she is single for now.

Interestingly, her valentine post in subsequent years also proved her singlehood. She spent the day of Valentine's with her best friend and adorable pet dog in 2019. Though she has no romantic association in real life, her TV character Veronica in Sierra Burgess Is a Loser shared romantic ties with Spence, played by Will Peltz.

Kristine was raised in both Oslo, Norway, and New Jersey, USA, by her Norwegian parents. Due to her dad's job, she frequently moved between the two places. In an interview with W Magazine, she gushed about the journey:

It’s such a weird combination… We’d go back and forth because of my dad’s job. They were very, very different. As a kid, I didn’t really appreciate it, because you have to say goodbye to your friends all the time.

While not much is known about Kristine's parents or siblings, the native of Norway was born on 21 September 1995. She lives in Williamsburg, Brooklyn.

With hit movies like Apostle, Prey, Low Tide, Rebel in the Rye and job with brands like CHANEL, Miu Miu, Calvin Klein, Gucci, Armani Beauty and Forever 21, Kristine has been rising to prominent heights of success. She is reportedly the holder of $400,000 net worth.

At just the age of 23, the actress has shown remarkable talent and immense dedication to the world of acting.

In 2019, she started working on the production of Veronica The Assistant and Looking for Alaska. If she continues down this road, there is a good chance Kristine will garner massive success in her acting career very soon.