By LRU Writer | On: October 01, 2018
Actress Cailee Spaeny may be young in terms of age and height but she has already created enough buzz with her acting skills and seducing looks...Cailee is close to her parents especially her father...Bio Along With Parents Details; Age, Height And More...Dating Actor Boyfriend... 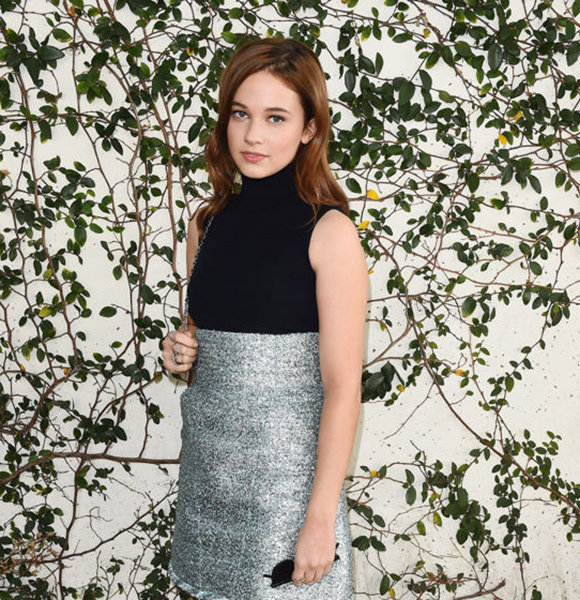 Actress Cailee Spaeny may be young in terms of age and height but her acting skills and seducing looks are not less than a matured artist. Securing many distinguishable acting roles one after another, Cailee has recently added another honorable project, Pacific Rim Uprising under her resume.

However, that's not the only resume she has been building on for the actress has been dating someone of the same profession.

While uncovering the bio and family details of Cailee, why don't you dissect her love life along the way!

Bio Along With Parents Details: Age, Height And More

One of the nine children of her parents, Cailee grew up in Springfield, Missouri along with her sister, Caisha and seven other siblings. Cailee, who possesses Swiss-German ethnicity, is close to her parents especially her father Mark Spaeny and regularly loves to visit them.

Even after achieving the celebrity status, Cailee remains in close contact with her parents and has often featured them on her social media posts. On 22 June 2014, she shared a tweet wishing her parents on their 17th anniversary in which she wrote,

"Happy 17th anniversary to the best parents in the whole world! Love you guys!"

Similarly, she also loves dedicating her social media posts towards her parents on different occasions and sometimes even without any occasion. On 14 May 2017, she shared a Facebook post expressing her love and even called her mother the strongest woman on Earth.

"Hey mom. We've been through everything together... you are the strongest woman I know! I wouldn't be where I am today without you. You have sacrificed so much for me so I could live the life I've dreamed of. I can't say thank you enough... I love you to the moon and back even when skies are grape!"

Moreover, she uploaded a heartfelt message wishing her father's day on 18 June 2017.

"Happy Father's Day to the one who has always had my back, who has supported me and my dreams since day one and never doubted me. You have such a young heart and a kind spirit. Thanks ya big goof x" Cailee indulged in acting at an early age and was a regular performer at the Springfield Little Theater, where she took part in various plays during her childhood. She got her major acting role playing the lead character of Ariel in the Disney's production, Little Mermaid Jr.

Cailee, who ages 21, became an overnight star after news surfaced in 2016 that she was cast as one of the lead actors in the science fiction movie Pacific Rim Uprising, the sequel of 2013 action/fantasy film Pacific Rim. In the movie, she appeared alongside actors John Boyega and Scott Eastwood; and even earned favorable reviews for her performance.

Further, she has also acted in the short film named Counting to 1000 and a 2016 drama titled The Shoes. Moreover, some of her upcoming projects include Vice, On the Basis of Sex and Bad Times at the El Royale.

Apart from acting, Cailee standing at the height of 4' 11" (1.5 m) is also a terrific singer-songwriter and even released her first single titled Fallin on iTunes.

Cailee is currently dating actor Raymond Alexander Cham Jr. and a picture shared by her is enough to love that has been nurturing between the two. On 29 August 2018, she posted an Instagram picture which showed Cailee getting intimate with the actor and even mentioned Ray as the "love of her life."

More From LiveRamp Up:- Debby Ryan Dating Status Now | Who Is Boyfriend Of Insatiable Actress? Earlier, in May 2018, Cailee and her boyfriend were also spotted spending their time together at the Central Park in Manhattan, New York. Another cute gesture of love came when Cailee's wonderful shoot picture for V Magazine was posted by her boyfriend in his Instagram on September 2018.

The couple looks very happy dating each other but looks like they are taking a casual approach to the relationship and are in no hurry to take it to the next level.