By LRU Writer | On: March 03, 2020
Kyle Martino is a sportscaster was named MLS Rookie of the Year in 2002 with the Columbus Crew...His current relationship status is...He was married to...He divorced his ex-wife in...They have two children named...Kyle was born on...His height extends to...His zodiac sign is... 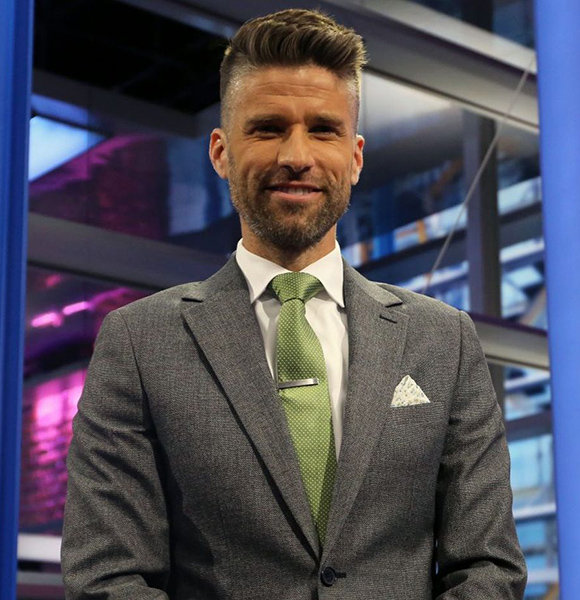 Sportscaster Kyle Martino is a former MLS player who played on the U.S. national team in the World Youth Championship in Argentina in the year 2001. Also, he was named MLS Rookie of the Year in 2002 with the Columbus Crew.

After his retirement from the field, Kyle became a soccer commentator and analyst.

The sports analyst is reportedly dating, using an online dating app called Raya; a source confirmed to Us Weekly in January 2020. The two first met at a Sky Bar in Los Angeles. They bonded together and started to date. Eventually, Kyle and Eva got engaged in December 2010.

They tied the knot on 29 October 2011 in Charleston, South Carolina. And Helen Prejean officiated their wedding ceremony.

On the big day, Eva wore a Lela Rose dress while Kyle went for Brioni.

On 9 August 2014, the couple welcomed their first child, a daughter named Marlowe Mae Martino. And after two years, the couple was blessed with their second child- Major James Martino- on 19 October 2016. In September 2019, Kyle and Eva announced that they are expecting their third child together.

Just after a month of their announcement of a third baby on the way, the sportscaster and his ex-wife ended their eight-year-long marriage in November 2019.

Our family is starting down a new path. After a lot of thoughtful consideration, and work on our relationship, we have made the difficult decision to lovingly part ways as a couple. We are committed to, and excited about, raising our three beautiful children as close friends and deep partners, and we have the utmost respect for one another.

In January 2020, Eva ditched her married name and restored her maiden name.

Who Is Eva Amurri?