By LRU Writer | On: March 03, 2021
Lauren Alaina didn't reveal the real reason behind her split with boyfriend...revealed to the host that she was dating comedian...were more than happy with their budding love affair 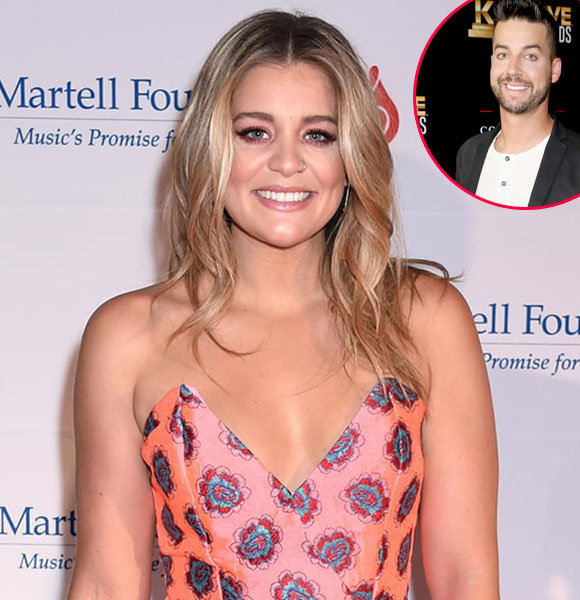 Appearing on The Bobby Bones Show on 14th May 2019, Lauren Alaina revealed to the host that she was dating comedian John Crist for quite a while. The American singer mentioned that she couldn't have been happier. Likewise, on various shows, she didn't shy away from her excitement and love for the comedian.

In one instance, when John crashed the interview, the country singer exclaimed in excitement and called him "my boyfriend." Lauren was there to promote her new single called "Ladies In The 90's."

But everyone knows that love hits you hard, in both the best and worst way possible. Likewise, that's how it played out for the artist too. Let's find out how.

Talking to the host Bobby Bones, Lauren revealed how she had slid into John's Instagram DM. To her dismay, her boyfriend didn't even recognize her. But, after scouring her Wikipedia page, the comedian admittedly replied with a flat joke about performing in a church in Georgia while growing up.

Despite the not so feisty early exchanges, the lovebirds eventually hit it off. No doubt, a significant accomplishment considering the 11-years age difference. During the stated The Bobby Bones Show sit down, John Crist - age 35 - referenced the gap by jokingly quipping:-

“I’m 35, her mom is 45, and she’s 24 … so I’m closer to her mom’s age than her. When she and her mom are arguing about stuff I’m literally in the middle like, ‘Actually your mom makes some good points'”

After they began dating, the Road Less Travelled songstress grew closer with the comedian boyfriend's family. Lauren Alaina drooling over her ex-boyfriend John Crist during the Bobby Bones Show appearance in May 2019 (Photo:- People.com)

However, their relationship was a short stay. Coming into 2019, this singer-dancer went through a hard time when she ended her six-year relationship with ex-fiance Alex Hopkins in January. Similarly, her romance with ex-boyfriend John Crist was slowly building up when her boyfriend was accused of sexual misconduct from five different women.

Learning about the news left Lauren in deep shock. On the other hand, John accepted, causing the wrong deed and apologized about his wrongdoings. After that, there was no turning back. They split up in October 2019 just two weeks before she joined the Dancing With the Stars.

After entering into the show, the host Tom Bergeron asked her about her relationship, to which she replied, saying she was dating the show. Now, the songstress is taking the dance show as a platform and expressing her feeling to her fans. In October 2019, she performed in the stage paying tribute to her late step-dad, who passed away in 2018. Similarly, she and her dancing partner Gleb Savchenko nearly faced elimination in the hands of the judges in November's episode as the pair hung on by the thread.

The news of Lauren dating John came four months after she announced her split from her model boyfriend-turned-fiance, Alex Hopkins. They were an engaged item between July of 2018 to January 2019.

Before getting engaged, the American Idol Alum and her ex-boyfriend Alex dated almost for five and a half years. They were together since high school.

All in all, the separation was amicable. Both Lauren and her former fiance took to their respective social media to speak highly of one another once the split news hit the web.

Unfortunately, the artist was destined to fail in love again. While the new season of Dancing With The Stars was on the way, Lauren was practicing hard with her dance partner in the show.

It turned out that she was training to an extreme length, which had taken a toll on her physical health. In an interview she revealed,

" I mean, it’s (the preparation) going great. It’s just so hard and my feet hurt and I have like blisters, and my back [is in pain]. I feel like someone strung me up by my hands and hit me with a baseball bat a few times."

On top of that, she didn't seem to be doing well on the emotional side, either. Yes, she surprisingly disclosed about her breakup on 16th September 2019, just a few hours before DWTS was set to premiere. Of course, she didn't reveal the real reason behind her split and assured the interviewers that she was in good terms with her ex.

Following the split, fans and tabloids were curious to know if Lauren was in the process of finding another date. However, it turned out that she had diverted her focus entirely for her performance at Dancing With Stars. But that didn't mean she wasn't getting dating proposal from guys as when her dancing partner  Gleb Savchenko approached with the question, she replied,

"A lot of them have reached out. But I’m not, like, interested in dating anyone right now.”

Interestingly, there were also speculation coming from another cast such as  Bobby Bones about her chance of dating Gleb. But she quickly made a stance on their relation clear citing,

“No, no … I have not fallen in love with my dance partner”

Thankfully, it's for the best that she maintains only a friendly and professional relationship with Gleb as he is a married man with two children.

On Her Weight Loss

While still with Alex, the country singer overcame countless obstacles. However, none come close to her battle with body image issue.

Since childhood, Lauren struggled with an eating disorder. But, all thanks to her then-boyfriend Alex, she gained dramatic weight loss by shredding about 11 kilograms from her body in 2016.

Back in 2011, she initially stunned the American Idol viewership by dropping an astounding 40 pounds. But, the reality star didn't stop dedicating herself every way possible on several further projects and continued with her efforts.

Throughout the rehearsal that started from July 2019 for the 28th season of ABC's show Dancing With The Stars, she again managed to lose a weight of 11 kilograms.

Moreover, she revealed that her late stepfather was her primary source of inspiration during her journey at Dancing With The Stars.

Lauren's eating disorder worsened when her parents went through a rough divorce. But, since splitting, both her mom and dad remarried. Born to father J.J Suddeth and mother Kristy, she's not her parents' only child. The country songstress has a brother named Tyler Suddeth.

Because of her family background, the Interscope artist - now age 25 - probably identifies as belonging to Caucasian ethnicity.

Born as Lauren Alaina Kristine Suddeth in Rossville Georgia in 1994, the Like My Mother Does crooner rose to prominence after being the second runner-up in season 10 of American Idol.