By LRU Writer | On: August 09, 2019
Laurie Hernandez is an...career and activities have kept her...child of parents...She went on to attend the... her career strived to new heights...her education ... estimated net worth is... 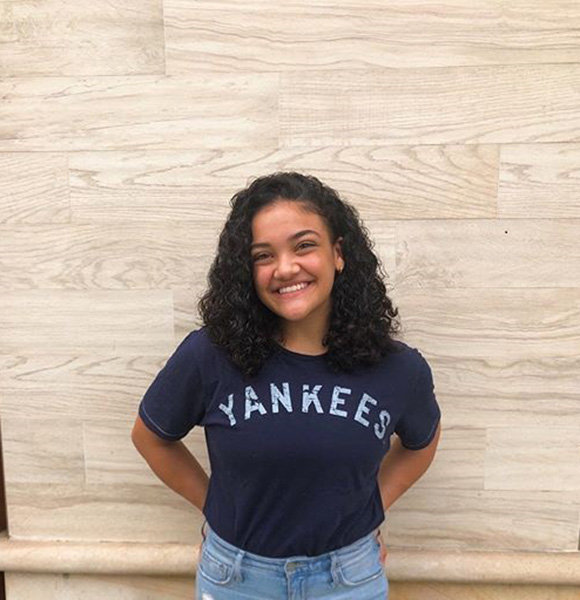 American gymnast Laurie Hernandez is an individual silver medalist and team gold medal-winner in the 2016 Olympics. A leading member of the 2016 U.S. Olympic Women's Gymnastics Team, Laurie was nicknamed "The Final Five."

Besides her growing fame in the gymnastic world, she was also the winner of the 23rd season of Dancing with the Stars partnering up with Ukrainian-American professional dancer, Valentin Chmerkovskiy.

The 19-year-old has never been in a relationship. Laurie's career and activities have kept her too busy, resulting in a lack of a romantic relationship. Quite the believer of the concept of self-love, Laurie puts herself first and only focuses on her career and family.

Apart from a picture of her attending the prom, Laurie has no other association with any other men. A prolific Instagrammer, her accounts are filled with posts of family and friends, but there have been no snaps of a romantic partner yet

With no facts and zero news of a possible boyfriend, it is quite clear the beauty of 5 feet 1 inch (1.55 m) height, and 54 kgs weight is single to date.

Born on 9 June 2000 in New Jersey, Laurie is the child of parents Anthony Hernandez & Wanda Hernandez. Originally named Lauren, she is the smallest among her siblings: Marcus Hernandez and Jelysa Hernandez. The second-generation Puerto Rican started her gymnastics career at a very young time. At just five years of age, she asked her mother to begin taking gymnastics classes. Meeting her coach and manager Maggie Haney during her practice rounds, Laurie bagged multiple gold medals, earning her very first in the 2013 U.S. Classic Competition in Chicago.

She went on to attend the USA Gymnastics development camps, where she excelled even further. But unfortunately, in 2014, the gymnast was sidelined due to her dislocated right kneecap and a fractured wrist, slowing down her meteoric rise to stardom.

Nevertheless, the Hispanic beauty bounced back in 2015, performing in four competitions, she earned gold in all four of them. Laurie was meant to be in the U.S gymnastics team the same year but didn't qualify due to her age.

But, the age restriction was removed when she turned 16 in 2016. Qualifying for the national team, the teenager joined Gabby Douglas, Aly Raisman, Simone Biles, and Madison Kocian to compete at the Rio de Janeiro Olympic Games in August 2016.

While her career strived to new heights, her education could not bear the weight of the training required to achieve her status. Homeschooled since the third grade, she attended Abeka Academy High School but lost the opportunity to pursue her college education. Giving up her NCAA student athelete eligibility, she decided to focus on her gymnastics career instead.

The American artistic gymnast has achieved a lot in her early years. Grabbing multiple awards, titles, and medals to her name, Laurie's estimated net worth is $2 million.

Still rising professionally, Laurie has also made significant financial and career decisions to boost her earnings.

Set to compete in the 2020 Olympics, the gymnast has been preparing for the destined day in 2019. She also wrote two books: I Got This: To Gold and Beyond, and She’s Got This, which has made her one of the best selling authors by the New York Times.

American Gymnast 2016 Olympics Gold Medalist Dancing with the Stars I Got This: To Gold and Beyond She’s Got This