By LRU Writer | On: September 23, 2019
LeGarrette Montez Blount, you will realize what...attended Taylor County High School in Perry, Florida, and while he studied there, he took part in two sports...his aggressive nature and notoriety in and off the field gained...has been part of more than five teams in the NFL and possesses a ton of experience when it comes to... 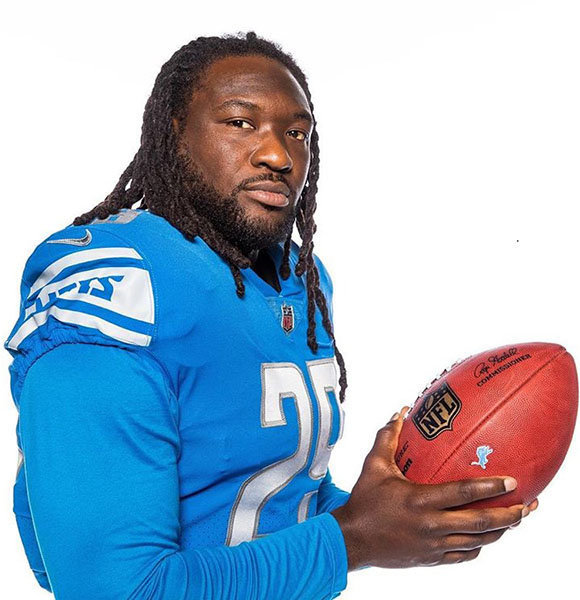 His resume includes winning NFL Offensive Rookie of the Month in 2010 and two time FedEx Air & Ground NFL Player of the Week. Also, he won an AFC Championship with the Patriots in 2014.

In 2018, he trained with the Detroit Lions team as a free transfer. But, as of 2019, he is working as a host for a football camp at Naval Station, Norfolk.

LeGarrette Blount is not married as of yet, but he shares a family with a longtime girlfriend turned fiancee', Merissa McCullough. The couple first crossed paths at the University of Oregon in 2009 during his senior year and fell in love. Further, the couple welcomed a son, LeGarrette Jr Blount at the beginning of the 2009 football season. It was reported that the duo exchanged the engagement bands.

However, in September 2013, when a reporter asked LeGarrette about his relationship, he revealed about the break up with his girlfriend.

But, to the excitement of his fans, in late 2016, the Patriots star mentioned Merissa as his fiancee'. And in 2017, LeGarrette was accompanied by his baby mama at the Patriots ring ceremony.

In addition to a firstborn son, the couple became parents to a baby named Zi Blount in 2018.

Raised in Tampa, Florida, he attended Taylor County High School. While acquiring education, he was part of two sports- football and track and field in college. For four back to back years he was one of the best players in the starting lineup in the school’s football team and a three-time 1,000-yard rusher in the college championship.

Though he was a shining light with a promising future ahead of him in NFL, his aggressive nature and notoriety in and off the field gained a lot of attention. Once in 2009, he was suspended to have punched an opponent during the end of the game. And in 2014, he was arrested with the possession of marijuana just outside of Pittsburgh.

But, he worked on his behavior and managed to hold his own in the tough NFL crowd. The athlete of the height of 6 feet (1.83 m) and a weight of 112 kgs have managed to leave a legacy in NFL.

After all, he has been part of more than five teams in the NFL and possesses a ton of experience when it comes to the pressure situation.

LeGarrette began his professional career back in 2010 with the San Francisco 49ers who drafted him. However, after a meeting with Jeff Fisher, Tennessee Titans' head coach, the athlete decided to join the Titans as an undrafted free agent.

Despite being signed, LeGarrette failed to clear his waivers and did not make the rookie practice squad for the Titans.

However the same year, the athlete was claimed off of waivers by the Tampa Bay Buccaneers. He signed to play with the Buccaneers on the 6th of September 2010. After almost three years with the team, LeGarrette was traded in exchange for the running back Jeff Demps to the New England Patriots on the 27th of April 2013.

A year later, the running back signed a two-year contract with the Pittsburgh Steelers on the 28th of March 2014. But, LeGarrette would then return to his former team The New England Patriots. On the 20th of November 2014, the player signed a two-year deal with the Patriots.

After completing his contract with the Patriots, the running back joined the Philadelphia Eagles to a one-year contract on the 17th of May 2017. The deal was for $1.25 million with $400K guaranteed.

Later, on the 16th of March 2018, he signed a one-year contract with the Detroit Lions. The deal was worth $4.5 million with a $1 million signing bonus plus $2.5 million in incentives.

During his decade in the sport, the NFL player has managed to claim rebounders of fame and glory. So, it is no suprise that he has a net worth of $7 million as of 2019.