By LRU Writer | On: August 02, 2019
Linsey Godfrey is an Emmy winning soap opera actress...She got bestowed with the honor with her portrayal of...Linsey fell in love with a fellow actor Robert Adamson in 2013. The dating relationship became... 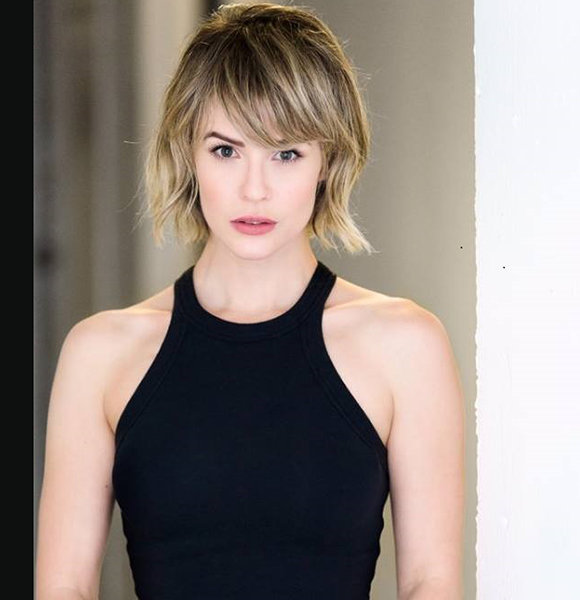 Linsey Godfrey is an Emmy-winning soap opera actress. She got bestowed with the honor with her portrayal of Caroline Spencer Forrester on The Bold and the Beautiful.

Post bidding goodbye to the memorable role; Linsey took on another soap opera part in NBC’s Days of Our Lives in 2018. Her performance as Sarah Horton has been winning hearts ever since.

Linsey fell in love with a fellow actor named Robert Adamson in 2013. The dating relationship became serious as the actress got pregnant with The Young and the Restless actor’s baby.

As the arrival of their child was coming close, Linsey and her boyfriend decided to take their relationship to the next level. The pair got engaged in May 2014. Just a month after the joyous day, the actor duo’s daughter, Aleda Seren Adamson, was born on 12 June 2014.

Although Linsey and her baby daddy had decided to get married and provide a stable family to their upcoming child, things didn’t work out. After the arrival of Aleda, differences came between the couple. Instead of becoming husband and wife, they decided to part ways in 2015.

Linsey didn’t give up on love after a heartbreaking failure of her relationship. She took the past in her stride and decided to move on with Marco James - also an actor.

The soap opera star was quite open about her dating life as she used to tweet about her date nights with Marco. But, the romance which brewed in 2017 couldn’t last long. Linsey and her The Vampire Diaries star boyfriend ended their relationship.

The Days Of Our Lives star eventually moved on with boyfriend Breckin Meyer. She revealed their romance via Instagram in March 2018. Interestingly, Breckin is also an actor like Linsey’s past boyfriends. His work credits include Clueless, Road Trip, and Designated Survivor.

The actress flaunted her love for new man by revealing that she had the best birthday ever with Breckin on 25th July 2019.

The actress of Caucasian ethnicity started working in the robust showbiz as a teenager. Her first role was in the 2005 TV series, Surface. However, as soon as she landed her debut role, Linsey's life turned upside down. She got diagnosed with cancer, Hodgkin's lymphoma, in 2006. But, she fought the disease and returned to acting cancer-free.

Linsey - height 5 feet 4 inches (1.63 m) - got guest-starring roles in TV shows, namely Cold Case and CSI: Miami. But, it was her role in The Bold and the Beautiful, which increased her bio as a widely recognized actress.

The 31-year-old actress boasts a net worth of $600K, courtesy of her blossoming career.