Who Is Lisa Whelchel Husband? Details On Children, Net Worth

By LRU Writer | On: November 26, 2019
Groomed to be a star from an early age, Lisa Whelchel is one of the most...Her rise to stardom, however, came when she began playing the spoiled and rich...Thier marriage came to an abrupt and silent end. On the reason why the couple decided to...The pair during their union welcomed... Lisa has amassed a fortune worth...

Groomed to be an actor from an early age, Lisa Whelchel is one of the most popular actresses in the American entertainment industry.

Born on 29 May 1963, Lisa was put into acting classes at the young age of eight to overcome her shyness. After gaining some confidence, she went on to perform in a musical theater for four years.

Eventually, at the age of 12, she was selected from a nationwide talent search to be a Mouseketeer on The New Mickey Mouse Club. Her rise to stardom, however, came when she began playing the spoiled and rich Blair Warner on the sitcom The Facts of Life from 1979 to 1988.

Lisa, however, left acting in the year 1990, to be a stay-at-home mom but eventually did return to the world of entertainment in 2012 on the show Survivor: Philippines.

So who are her family, her husband, and children for whom she left behind her acting career, know al the details down below!

Married in 1988, Lisa was previously married to pastor Steve Cauble. The pair remained married for 24-year before separating in March 2012.

Their marriage came to an abrupt and silent end. To date, the couple has remained mum about the reason behind the marriage's end. Lisa Whelchel with her ex-husband Steve Cauble and their children in 2004 (Photo: dailymail.co.uk)

“I just never thought it would happen to me,It was painful to realize that it wasn’t going to work out.”

Her comeback to the world of entertainment also came after her divorce. Apparently, she chose to take part in the Survivor series to divert her attention from her divorce and loss.

Lisa and her ex-husband remain good friends and even go out to dinner and movies sometimes.

As of 2019, the actress has already moved on with her life. Lisa is engaged to beau Pete Harris. 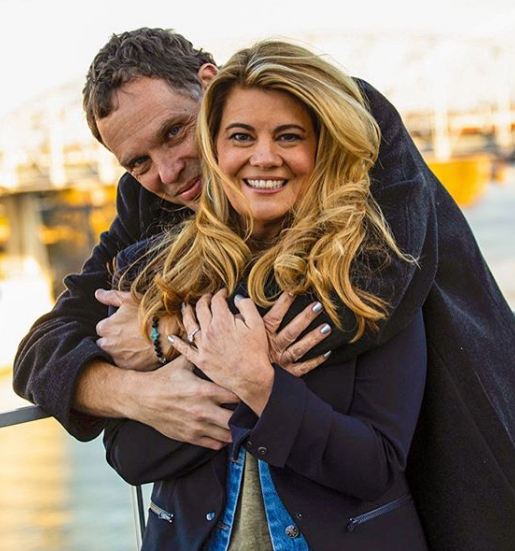 Her fiance Pete became a frequent face on Lisa's Instagram account since November 2017; apart from that info, not much is known about how or when they started dating.

Lisa and her ex-husband are parents to three children: a son Tucker Cauble and two daughters Haven Weits and Clancy Orantes.

All of her children have relationships of their own. Her eldest child, son Tucker got engaged to Cayla Korven in August 2019. And, her daughter Haven is already married to a guy named Aaron Weits, and the couple shares a little girl Eisley Virginia. Even the youngest Clancy is already married.

As a recurring host of the new original series Collector's Call on the television network, MeTV, Lisa, is still quite popular in the entertainment industry. Adding in her early career and work as a TV host, Lisa has amassed a fortune worth $3 million.

In 2019, Lisa enjoys a peaceful life in her house in Castaic, California.