By LRU Writer | On: October 23, 2019
Lucy Alexander is one of the most loved British TV presenters. She shot to worldwide fame via the BBC...Lucy is happily married to the former soccer player, Stewart Castledine. The pair got married on...From nearly two-decades of their union, Lucy and her husband boast two children... 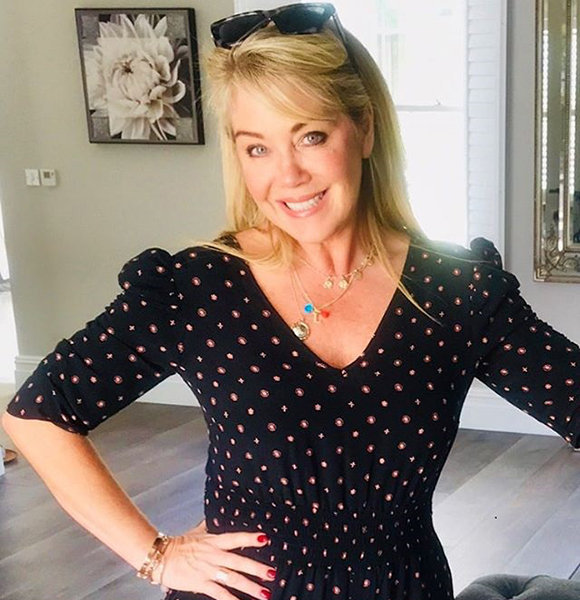 Lucy Alexander is one of the most loved British TV presenters. She shot to worldwide fame via the BBC show, Homes Under the Hammer in 2003.

The TV star then went on to host the show for over a decade until her exit in 2016. However, she hasn’t left the BBC family just yet. In 2019, Lucy started presenting the series, The Customer Is Always Right, for the network.

Lucy is happily married to former soccer player Stewart Castledine. The pair tied the knot on 3 June 2000 in an intimate wedding ceremony. The lovely duo remains strong as ever to date.

Her daughter, Kitty is an inspiration to many. In February 2010, she suffered from transverse myelitis - a neurological condition - which damaged her spinal cord and threatened her life.

But, the TV presenter’s daughter overcame the adversities and survived. Today, a wheelchair-bound Kitty lives her life to the fullest, and her mother couldn’t be prouder. Lucy often mentions about the will power and positive outlook of her daughter through social media and interviews. Further, the British celeb’s son, Leo, also makes his parents proud. In 2019, he won a soccer prize at his school. Maybe, he will follow the path of his former soccer player father.

The siblings sure make their parents the happiest with their achievements.

Long before becoming TV’ darling, Lucy started her showbiz journey as a nine-year-old. Well, she starred in the ad of Fairy soap.

Following the taste of the entertainment world at an early age, Lucy decided to pursue a career there. Thus, she went to drama school and later managed to land a part in Chesney Hawkes’ 1991 music video, The One And Only.

Finally, with the 1992 show, Mega Mania, her journey as a TV presenter began. She then went on to host shows, namely Milkshake! and It's a Knockout.

Finally, her breakthrough came in 2003 with the show Homes Under the Hammer. While working on the show, Lucy found time to work in other programs as well. Her filmography includes shows, namely, Put Your Money Where Your Mouth Is, Fresh Meat, and Celebrity Antiques Road Trip.

Being a TV show veteran, the personality surely makes over $59,994 per year salary of a TV presenter. It is reported that Lucy's net worth is millions of dollars.

Many might not be aware, the TV presenter - aged 48 - was independent since she was a teenager. Given her early start in the business, she had saved around $1200. With the money, she bought a two-bedroom flat in Clapham, South London.

Further, she did jobs like working at Cadbury’s Creme Egg chicken while studying at drama school. No wonder, her hard work finally paid off with her TV success.