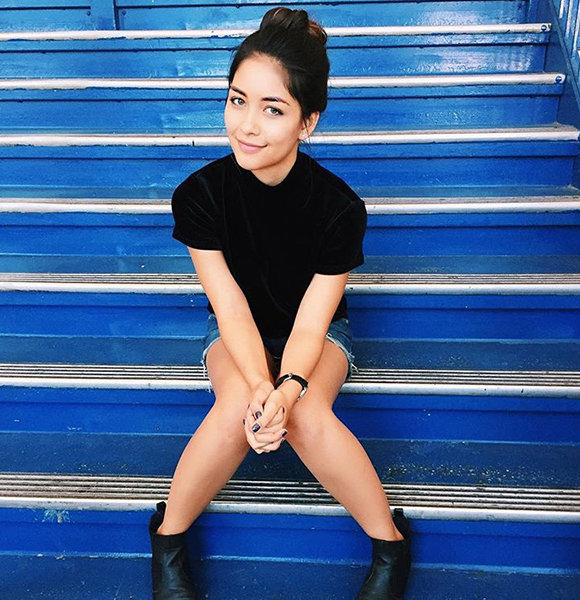 American actress Lulu Antariksa has been dedicated to her TV roots since her acting debut in 2002.

Although she isn't a household name yet, Lulu's performance in the web show T@gged is generating a growing fanbase with every passing day.

As an actress, the California native loves experimenting with her roles and even played the lesbian character, Penelope Park in the show Legacies.

With her beautiful hazel colored eyes and black hair, it's apparent that Lulu's fans find a distinct vibe in her look. On top of that, many of her well-wishers are curious to dive deeper into her background. So, let's take a look closer at her personal life.

Her father is of Indonesian nationality as he had immigrated from the country's capital, Jakarta. Likewise, the actress' mother Kara Burger Antariksa has a pure European origin as both of her parents are from Germany. As a result, 24-year-old Lulu possesses an equal mix of European-Asian ethnicity.

Indonesian Ancestry:- Constance Wu Started Dating White Boyfriend; What If She Married And Made Him Her Husband?

She is the youngest and the only girl child of her parents. Her older siblings are Mark Antariksa and Chris Antariksa. Lulu also has a third brother, whose name hasn't been disclosed yet.

The artist found her inspiration to choose an acting career during her school days at Valencia High School. She was very active participating in various musicals organized by her school. At an early age, she took a liking for the plays of authors such as Arthur Miller.

Furthermore, her willingness to pursue a career in performing arts took shape at the age of 15 after finishing high school.

While the actress's on-screen love life is apparent, she has managed to keep a very low profile on her real-life dating status. However, in 2013, there were rumors that she was dating singer, Max Schneider. The two had earlier collaborated to make a video on Max's cover of You and I, which brought the pair closer as friends. Lulu Antariksa and rumored boyfriend Max Schneider sing the cover version of You & I in 2011 (Photo: YouTube.com)

Lulu and Max were undeniably good friends with one another. But, the two never emerged out as partners, which has led many to believe that the duo was never serious as lovers.

For now, Lulu is reportedly single and focussed on her acting career.

What Is Lulu's Net Worth?

As the artist has made recurring appearances in a limited number of shows, her net worth isn't considerable. Also, her talent agency hasn't yet disclosed it either. However, Lulu has acquired income for promoting brands apart from her acting salary.

In 2016, she endorsed a stationary brand named May Designs and did promotions for Root and Branch Coffee a year later. As the T@gged actress also appeared in McDonalds' TV commercial, she must have received an impressive paycheck from the ad.