MacKenzie Bezos, 48 & Husband, How Much Is Wealthiest Couple Net Worth?

By LRU Writer | On: April 05, 2019
Being married to the richest man in the world, Mackenzie Bezos has faced the media attention which she didn't initially sign up for......Mackenzie, who is the wife of ..., has successfully dealt with the attention she received due to the fame of her Amazon's CEO husband......In the meanwhile, she has also managed to craft a separate identity for herself as well......So, it can be assumed that maintaining a family has never been a distraction for the Bezos'...... 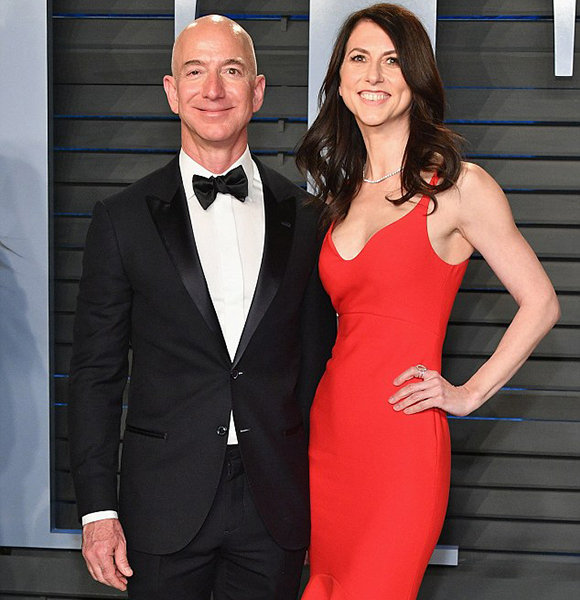 Being married to the wealthiest man in the world, Mackenzie Bezos faced the media attention which she didn't initially sign up for.

Mackenzie, who was the wife of Jeff Bezos, successfully dealt with the attention she received due to the fame of her Amazon's CEO husband.

As the romantic journey between the couple initiated before they went on an adventure of Amazon, Mackenzie can be considered the factor behind Jeff's success as she always had the back of her husband.

In the meanwhile, she also managed to craft a separate identity for herself as a novelist.

However, she may have never been able to surpass the shadow of Jeff, as their marriage is the most talked about news despite the couple's separation in a multi-billion dollar divorce.

Mackenzie and her former husband Jeff were not only an example of professional success, but their personal life success was also just as exemplary. Happily married for more than 20 years, the duo’s love story seemed just as fascinating as their meteoric rise to fame and fortune.

She first met Jeff while in an interview at an investment management firm, D.E. Shaw, where he was a vice president of the company. The duo soon blossomed their love for each other and in no time were tying the knots, in fact just six months after they met each other. In an interview with Vogue in 2013, Mackenzie mentioned about their experience of working together and how she fell in love with Jeff.

“All day long I listened to that fabulous laugh, How could you not fall in love with that laugh?”

With the support of his wife, Jeff soon began his journey to work on his dream and founded an online retail firm in the form of Amazon in 1994, and the rest, as they say, is history.

With the tremendous success of Jeff’s business idea, Mackenzie and her husband enjoyed both fame and fortune. However, the road to glory was not always so easy, with Mackenzie sacrificing a lot to make sure she always had the back of her husband. Meanwhile, she also gave birth to the couple's triplet sons. Additionally, the duo also has a daughter; whom they adopted from China.

Have A Look: Double Trouble! Amazon Executive Roy Price's Fiancée Calls off the Wedding After his suspension cuz of Sexual Harassment Accusation

Despite being the wealthiest couple in the world, Mackenzie and her husband were always keen to set fundamental values of life into their kids. Jeff, while speaking at a Summit LA panel on 4 November 2017, mentioned his wife’s beautiful philosophy towards life that she wanted her kids to implement.

“She would much rather have a kid with nine fingers than a resourceless kid."

With such family beliefs, the couple had been able to mark their 25-years together. Unfortunately, the marriage wasn't about to last forever, and the couple legally separated after an impending divorce.

Mackenzie and her husband were working on to have a mutual divorce, and it's now that the separation is legally awarded.

The couple recently settled on their divorce terms as Jeff agreed to pay a sum of $35.6 billion from his fortune. Jeff, who has a net worth of $131 billion, may fall as the wealthiest man on Earth. However, for Mackenzie, divorce has become a blessing.

The settlement is about to make Mackenzie the wealthiest woman on Earth.

Meanwhile, Jeff is not mourning the financial loss. He is currently enjoying his bachelorhood with girlfriend Lauren Sanchez and is even looking to buy a $88 million worth property in Bel Air.

Mackenzie has to carry the fame and title of being the wife to the wealthiest man in the world everywhere she goes. However, this hasn't drawn her back from achieving her personal goals herself. With the dreams of becoming an author since her early days, Princeton University graduate took her first step to accomplish her dream by publishing her first book titled The Testing of Luther Albright in 2005. Her literary works have thus paid her well in her career as well. However, when it comes to net worth, the Bezos family income as a whole overshadows Mackenzie’s earnings.

You May Also Like: Tana Ramsay Bio: Wife Of Gordon Ramsay, Her Age, Children, Height & Facts

It has led her to get involved in philanthropy works as well.