By LRU Writer | On: November 14, 2019
Marcus Morris Sr and his brother have the same look, identical tattoos and both are professional basketball players which makes it even hard to mark them...forward welcomed his first child - a son, Thomas Morris. Jr - in October 2018 with girlfriend...playing high school level competitions for APEX Academy in Pennsauken he was adjudged a four-star prospect by... 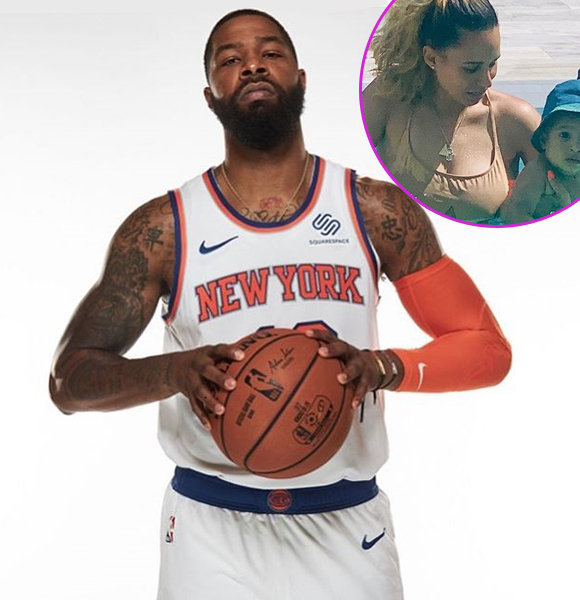 How often do you see a person in two different places at the same time and start scratching your head? The same case can be related to New York Knicks star Marcus Morris Sr. and his twin brother Markieff Morris.

The brothers have the same look, identical tattoos, and both are professional basketball players, which makes it even hard to mark them apart.

They also are the first twin brothers to start a game for the same team on the same day in NBA’s history. Amongst the two, let’s know more about Marcus Morris in detail from the article.

Marcus Morris has been blessed with a very supportive family, and he looks to continue the same from a family of his own.

The Knicks forward welcomed his first child - a son, Thomas Morris. Jr - in October 2018 with girlfriend Amber Soulds. The two have been dating for quite a long time and are already parents, as well. Amber is also the director of their Family Over Everything Foundation and looks after all the charity and services of the organization. However, the two are yet to get married and make things official.

Marcus Morris was born and raised in Philadelphia on 2 September 1989 to a single mother, Thomasine Morris. Growing up, the former Celtics forward was accompanied by a twin brother Markieff and the other three brothers Blake, David, and Donte.

Coming from a large family with only one breadwinner in the house, life was difficult for Marcus. Keen to help out her mother, he excelled in the sport of basketball.

While playing high school level competitions for APEX Academy in Pennsauken, he was adjudged a four-star prospect by Rival.com. Soon he made a transition into the college competition for University Kansas Jayhawks.

During his stay there, the 30 years old was named Big 12 Player of the Year 2010-11. Following the same Houston Rockets picked him in 2011 to feature in the NBA.

Now, the 6 feet 8 (2.07m) forward is a lethal weapon for the Knicks in 2019. He signed a one year contract worth roughly $15 million with the team and looking to make an impact on his short stay with the team.

Apart from that, he also believes in giving back to the people from his talent. Helping the needy, he is a proud partner of the Family Over Everything Foundation and supports the needy from the same. His tattoos in his body also reflect the hardship he and his family endured while growing up in the violent street of Philadelphia.

With the vision of helping people who are struggling with similar problems, he and his brother Markieff have taken the responsibility upon themselves. The foundation has helped a lot of people change their lives throughout the years.