By LRU Writer | On: July 23, 2018
An Ethiopian-born Swedish-raised chef, Marcus Samuelsson is recognized as the world-class chef with an award-winning cookbook author. While his cooking combines international influences with traditional cuisines from Sweden to Japan and Africa, his life is also no less than a food recipe. From sweet to the bitter taste of marriages, he has seen it all and fathered children, both planned and unplanned ones. 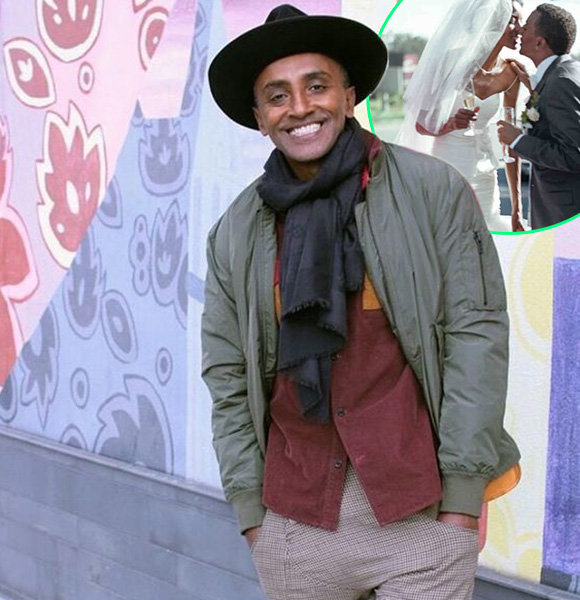 An Ethiopian-born Swedish-raised chef, Marcus Samuelsson is recognized as the world-class chef with an award-winning cookbook author. While his cooking combines international influences with traditional cuisines from Sweden to Japan and Africa, his life is also no less than a food recipe.

From sweet to the bitter taste of marriages, he has seen it all and fathered children, both planned and unplanned ones.

Well, with his high-profile personality and busy schedule, he has still maintained the time for his family which includes his wife, son and an adult daughter.

Also the visiting Professor of International Culinary Science, Marcus got married to the girlfriend model Gate (Maya) Haile in 2009 at Addis Ababa, Ethiopia. Similar to the award-winning chef, his wife, Gate was also born in Ethiopia and raised in Europe.

The couple was dating way before Marcus was inclined to the present fame. After three years of a dating relationship, in 2008 he proposed his then-girlfriend to be his wife. When she says yes, the couple flew to Sweden for an informal celebration party.

And the couple tied the nuptials with the real church wedding in Addis, with Maya’s brother as presiding priest. They held the wedding reception at the Hilton, then in Maya’s village, and gathered together with hundreds of people and one beautiful coffee ceremony after another.

The happily-married couple was blessed with the son named Zion Mandela on 19 July 2016. Aside from her son, the chef also has an adult daughter named Zoe whom he had hidden until he claimed the height of success.

The talented chef was adopted by the Swedish parents when he was just two along with his then four-year-old sister Linda. And his foster parents were more than just parents to him; they were always supportive to him and always encouraged him to walk on the right path.

His parents were also supportive of him when he confessed that he has a daughter named Zoe with the Hotel's chambermaid, Brigitta.

While he was working in Austria, he spent a night with Brigitta, and she conceived his baby. After knowing she was pregnant with her child, he was also striked by the thought of marrying her and spending his life in Austria.

His daughter named Zoe was born on five days after his 21st birthday. After the birth of their daughter, she did not want any involvement of Marcus but asked him to file the paternity paper.

Later, he confessed everything to his parents, and his mother insisted on him to pay the child support, which was difficult at the time.

Instead, his supportive mother took care of child support herself until he is capable on his own. However, his parents taught him that the little girl is his responsibility and as a father, he must take care of it.

"This is your responsibility, and while we will help you now, that little girls is yours to take care of. Always."

However, he diverted from his responsibility while his mother used to write since Zoe's birth and once Zoe was old enough, she also started writing back. But, one incident changed his heart. When Marcus' father was 80 years living in Ethiopia, he went to visit him.

After a decade-long- meeting with his father, he realized the power and love of a father to the children, which gave him courage to meet his own daughter.

"I realized all I needed to do was give Zoe what my father had given me: my own flawed self, without excuses or promises. The sad fact is, for the first 14 years of Zoe’s life, I never sent her a card or gift, never had a conversation with her."

Read Also:- Johnny Iuzzini Not Married! Dating After Controversy – Why Not?

Similarly, when her daughter, Zoe was seven, she spent two weeks in Sweden with Marcus' family. And his mother also took charge of Zoe’s financial future. And it was her who used to sent the cheque to Brigitta every month whereas he just funded a bank account.

"She loved Zoe and built a relationship with her that kept the lines open long enough for me to come around."

But when she was a teenager, Zoe came to meet his father with her uncle in New York, and she came up with the difficult question of her abandonment.

“That couldn’t be further from the truth. I was young and scared, yes, and I’m sorry for the way I acted. Why didn’t you ever call? I wanted to, really, but it was so hard to figure out how.”

Well, as of now, after spending the quality time with her daughter, he seemed to have dissolved the misunderstanding of Zoe and appeared to have formed a good relationship.

Notably, Marcus has a very busy schedule, and besides the chef, he is a father and a husband.