By LRU Writer | On: December 13, 2019
Matt Kuchar is one of the best golf players in the world...played in the Presidents Cup...is married to his wife for more than 15 years...has two children with his wife Sybi...earned a huge net worth of around $25 million from his...is also involved in charities... 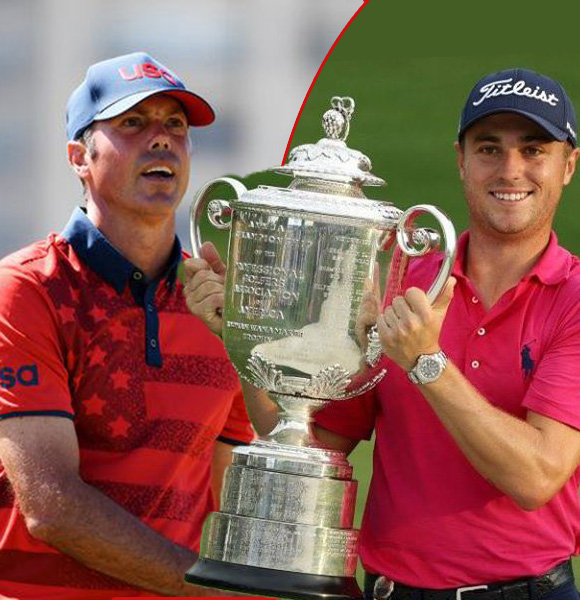 Matt Kuchar is an American professional golfer who plays in the PGA Tour. Starting his golfing journey at the age of 12, Matt began his pro golfing career in 2002 and has played in various tournaments at the highest level of the sport of golf.

Matt has played multiple times in tournaments such as the PGA Tour and Korn Ferry Tour. In addition to this, he has appeared for the national team of the US on various occasions, such as the Presidents Cup, Ryder Cup, World Cup, and the 2016 Summer Olympics.

Matt has been in a happy relationship, one for the past 15 years as of December 2019.

The professional golfer’s wife’s name is Sybi Kuchar. Matt and Sybi met each other for the first time at Georgia Tech. But, they didn’t start dating each other until after their graduation. Both of them were interested in sports in college - Matt was a golfer, and Sybi was a tennis player for the Georgia Institute of Technology. Maybe that was a factor in bringing them together.

The started going out in 2002, and the relationship quickly progressed. Eventually, the couple tied the knot in 2003 at the private hunting, fishing, and golfing retreat Cabin Bluff, on the border of Georgia and Florida.

Matt’s marriage only got stronger since his children were born. He has two children with Sybi - first son Cameron Cole (born - 2007), and second son Carson Wright (born - 2009). Matt is becoming one of the most successful golfers in the world, and that reflects in his wins and his wealth. He has managed to earn a considerable amount of money from golfing alone.

Matt owns an estimated net worth of around $25 million as of December 2019, according to Celebrity Net Worth. He has won a huge total of $50,130,467 during his career as a professional golfer and is on the 9th position of All-Time Money Leaders list by ESPN.

But, earning a huge amount of money means very less if you don’t use it for something good. And, the Kuchars are doing their part in giving back to those who need help. The pair is involved in a few charities. Sybi is one of the supporters of Camp Twin Lakes, a charity that provides help for special needs children with serious illness and mental/physical disabilities.

Similarly, they are also involved with the Ronald McDonald House Charities and donated $25,000 to United Way in March 2015.