By LRU Writer | On: August 16, 2018
American anchor Melissa Francis not only has a fame for herself but also has a family she adores dearly. Melissa, with her perfect body measurements, has made a name for herself in the world of entertainment since she was a child. While she tasted fame since her childhood, she also has a life for herself away from the hustle of the media. She has been married with her longtime boyfriend-turned-fiance and shares her bundles of joy with him. 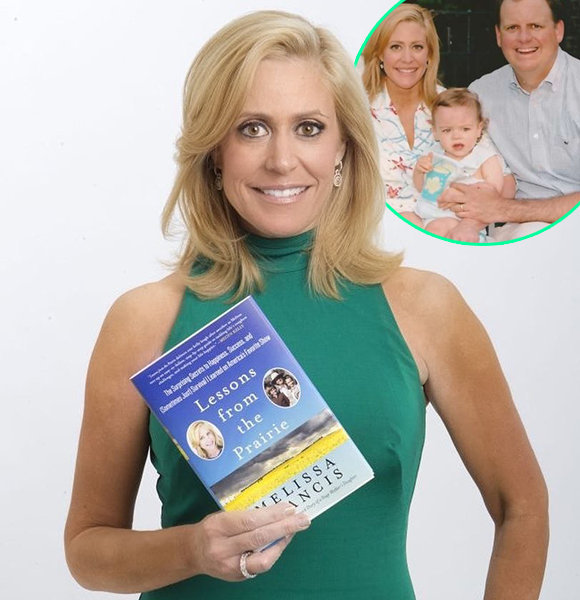 American anchor Melissa Francis, who anchors the weekday show America’s News Headquarters on Fox News, not only has a fame for herself but also has a family she adores dearly.

Melissa, with her perfect body measurements, has made a name for herself in the world of entertainment since she was a child. While she tasted fame since her childhood, she also has a life for herself away from the hustle of the media.

She has been married with her longtime boyfriend-turned-fiance and shares her bundles of joy with him.

Melissa Francis, a Harvard graduated journalist, has much on her plate beside her glittering career.

She leads a blissful family life with her husband, who loves her dearly. Melissa has been married to Wray Thorn, a managing director at Two Sigma Ventures. The couple first met in Boston. After dating for a while, the pair tied the nuptial knot in 1997.

Melissa revealed that one of the reasons for exchanging marriage vows with Wary was that her husband did not find her feet as ugly. Talking to Us Weekly, Melissa stated,

“I married my husband because he said my feet aren’t ugly — just sad.”

The couple has been going strong with their marriage since then. As of now, they are proud parents of their three children – sons Greyson and Thompson, and daughter Gemma. It turned out that Melissa did not have an easy pregnancy. She has a blood defect called Factor V Liden which resulted in the high-risk pregnancies with both of her sons. As they both wanted another family member added to their family, they had their third child through surrogacy. Gemma was welcomed into the family with the help of a surrogate family.

Well, after much effort to have a family they do seem to enjoy their family time together in a condo on Manhattan’s Upper East Side. Melissa recently posted an Instagram photo of her with her three children on 4 August 2018.

Early Life With Parents; Net Worth In Millions

Also an actress, Melissa Francis did not have a smooth childhood as she had her ups and downs while growing up along with her sister Tiffany.

The Little House on the Prairie star was raised by her mother who dedicated much of her life to pushing her children into the world of TV commercials. According to Melissa in her book “Diary of a Stage Mother’s Daughter,” her father owned a small business, and she and her sister made most of their earnings through their talents in the world of entertainment.

Adding to her acting profile, she also appeared in the show, Morningstar/Evening star and in the movie Man, Woman, and Child.

Well, her life took a different turn in 1990 and left acting to pursue journalism. After five years at Harvard University, she launched her career in media as a financial reporter and ended up anchoring in shows with an average salary of $52,000 while earning herself net worth of $8 million.

Melissa Francis appears as the new co-host in the show Outnumbered by Fox News. The Fox News Business Veteran, Jay Soroko, has announced that Melissa will join co-anchor Harris Faulkner in the 12 p.m. ET hour as they discuss top headlines of the day with rotating panelist.

You May Also Like: Demi Rose Bio: From Dating DJ Boyfriend To Stunning Measurements Of Instagram Star

Outnumbered is one of the number one shows in its time slot which highest total number of viewers. While Melissa has been loved by the views for her smart commentary and expert analysis, the Fox News veteran Jay did not miss out on acknowledging her for her good work.

Well, as for Melissa, she is glad to work alongside a brilliant woman on Outnumbered and is looking forward to sharing her perspective with the viewers.