By LRU Writer | On: February 18, 2019
It is always amusing to hear about a spun-out relationship with a diamond ring attached to it. In the time when it is hard to maintain a relationship while juggling both personal and professional life; to be able to witness a union that made it to the "Will you marry me?" point is comforting. 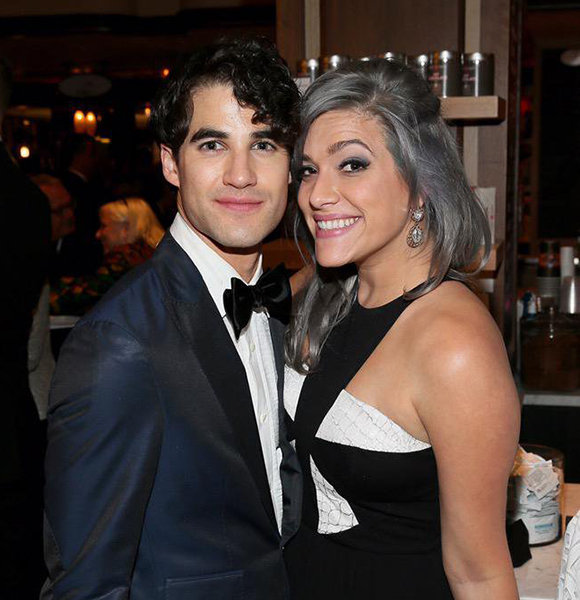 It is always amusing to hear about a spun-out relationship with a diamond ring attached to it. In the time when it is hard to maintain a relationship while juggling both personal and professional life; to be able to witness a union that made it to the "Will you marry me?" point is comforting.

The scenario can be linked entirely to Mia Swier, a writer/producer at Fox Network, who got engaged to her longtime boyfriend, Darren Criss. The pair got engaged after dating each other for seven long years and married each other, a year after announcing their engagement.

So let's take a moment to take a look at the beautiful journey of Mia and her fiancé-turned-husband, Darren Criss.

Married Her Fiance Via Hotel Wedding

A year after announcing the engagement, Mia and her now-husband Darren got married over the 2019 Valentine's Day weekend.

Although the details to the pair's wedding evade the public eye, the ceremony took place at the Ace Hotel located in New Orleans. Reports suggest that the event was an extravagant affair with many of her husband's co-stars from the popular show Glee in attendance. Mia Swier departs from the Ace Hotel with husband, Darren Criss in a red Rolls Royce after the wedding ceremony (Photo:- people.com)

The news of the reporter tying the knot with her actor husband comes months after the latter snagged his first ever Emmys. In his acceptance speech, he threw in a big shout out to her, saying:-

"Oh my God, you guys are witnessing the most extraordinary moment of my life thus far... My darling Mia, you roll the windows down and pump the music up in my life."

Interesting enough, Darren came forth with a decision to never portray a gay character ever again, just months before the nuptials.

Mia Swier is officially off the market from January 2018 -- or perhaps, even further back.

She replied "Yes" to her boyfriend Darren Criss, who proposed to her after seven years of relationship. The duo shared the news with their fans via Instagram; Criss shared a photo of the pair hugging each other, each with one foot thrown in the air with excitement.

The lovebirds did not reveal the date and details of the engagement but did share the news with the public through both Twitter and Instagram. Their fans are pouring their hearts out, congratulating the duo on getting engaged! The former Glee star, Darren, admitted that he started dating Mia before he made his debut in the show, but chose to wrap it up under the sleeves. They started seeing each other back in 2010 and did not reveal their relationship until 2013. He explained:-

Oh yeah, we've been together a long time. I didn't know I was going to be on TV when we started dating."

Ever since they admitted to being in a relationship, they became one of the favorites for paparazzi to stalk.

Mia Swier, age 33, is a TV producer who was born in Alabama. She attended New York University's Steinhardt School for Media Studies and Television Production. She got opportunities to work with ABC, NBC and USA Network while she was still in college.

Till this date, she has worked for some prominent TV shows, like Who Wants to be a Millionaire, Saturday Night Live, The Tony Awards, The Super Bowl and many more.

She, along with her business partner Dan Bricker, co-founded the film production company called Effin Media back in 2009.

Apart from being a producer and writer, she also happens to be a musician and goes by the stage name Mia Von Glitz. Although details of her parents remain confined, it is a public knowledge that her father worked as a painter under the same last name, calling himself Laszlo Von Glitz.

Despite the passion, Mia could not continue her music career, because of her busy work schedule as a writer, producer, and freelance director.