By LRU Writer | On: November 28, 2019
Michael Carter-William, he might be the luckiest person in the world as he always gets full support from his...provided him with moral support whereas his stepfather looked after his...looks after their daughter and supports her man during his... joined the Syracuse college team and played in the... 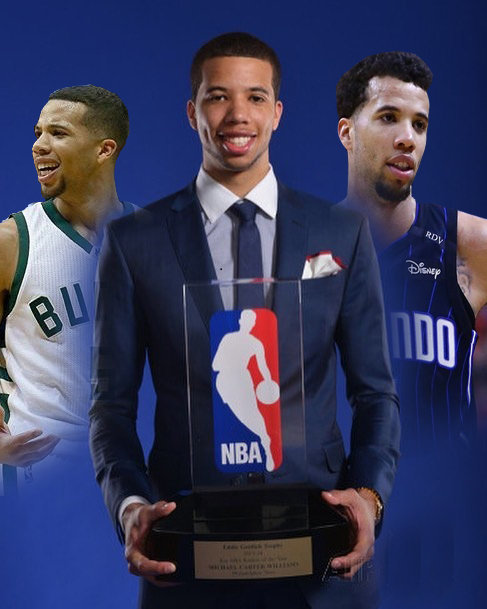 Maintaining one's stature as a fully-fledged professional basketball player is a daunting challenge in itself, especially with no one to watch your back.

But, the case of Michael Carter-William is quite the opposite. The NBA-alum might be the luckiest person in the world due to the support he receives from his family, mainly from his father Earl and step-father Zach Zegarowski.

During his first outing in the NBA, Michael faced some problems managing his time with managers, fans, training, and family. During such critical times, his father provided him with moral support; whereas, Michael's stepfather looked after his training, meetings, and day-to-day activity by living with him.

Apart from a very supportive family, another driving force in Michael's life is his girlfriend. The athlete has been inseparable from his partner Tia Shah ever since the two started dating in September 2017.

Together, the duo also parents a baby daughter named Charleigh - born in November 2019. Tia looks after their child and supports her man during his highs and lows. The couple took their relationship one step higher when they got engaged in January 2018 and now are looking to boost the momentum by getting married soon.

Michael Carter-Williams was born in Hamilton, Massachusetts, on 10 October 1991. He was raised by parents: Mandy Carter-Zegarwoski and Earl Williams, alongside a younger sister and three younger brothers in a family of seven.

Later his parents got split, and Mandy paired up with a new partner named Zach Zegarowski. Interestingly, the point guard was loved and supported by both his fathers. Further, he was also encouraged to pursue a career in basketball.

Eventually, Michael started his career as a freshman at Hamilton-Wenham Regional High School. At the time, his height was 5 feet 9 inches (1.79m), and a sudden growth spurt saw his height reach 6 feet 5 inches (1.98m), which got him a chance to transfer to St.Andrew’s as a third-year starter.

After a prolific high school run, he joined the Syracuse college team and played in the 2013 NCAA season. Michael was later picked by the Philadelphia 76ers in the same year and even won the NBA Rookie Player of the Year in 2014.

Suprisingly, the guard was transferred to Milwaukee Bucks in 2015 but was traded off to Chicago Bulls after just one season. From then onwards, the NBA star moved to two more teams before sticking with the Orlando Magic in 2018.

As of now, Michael is playing his second season for the Magic as an essential part of their team roster. But unfortunately, he missed a game against the Cleveland Cavaliers on 28 November 2019 due to a hip injury.