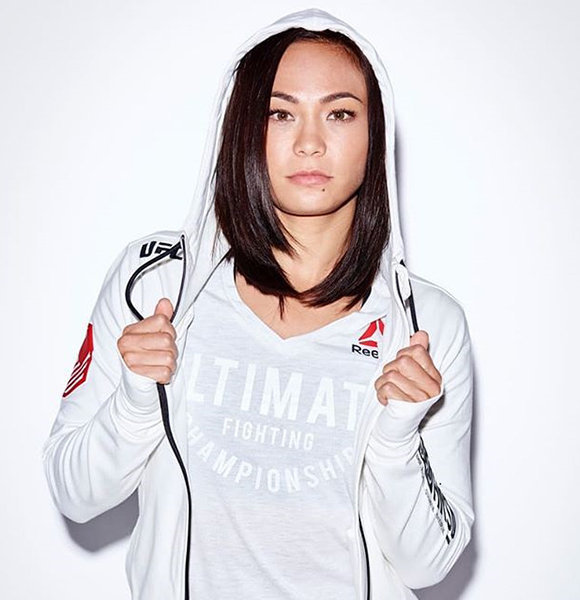 Mixed Martial Arts (MMA) sensation Michelle Waterson is a former Invicta FC Atomweight Champion - who made a massive transition to the fighting business from a splendid modeling career.

Apart from her rising MMA career, the star is also blessed with a happy family of three, Michelle, her husband, and a beautiful daughter.

Who is Michelle Waterson's Husband

Waterson is married to her long-time partner and husband, Joshua Gomez. Gomez is a former U.S. Armed Forces amateur boxing champion who currently serves as a financial advisor.

Waterson holds a strong name in the fighting arena with her aggressive striking and ground and pound game style. But, she is also a loyal wife to husband Joshua Gomez and a loving mother to daughter Araya. The couple exchanged the engagement rings in late 2010 and were eager to start a family together. Finally, on 14 July 2012, Michelle and her partner Joshua got married to each other and shared a beautiful daughter.

As of now, Michelle dedicates her fighting to her daughter & husband and works hard for her family.

The MMA sensation Waterson was born on 6 January 1986 in Colorado Springs, USA. Raised amongst some gallant men in the family, her father, grandfather, and brother all served in the military.

Possessing an American nationality but a mixed Thai and Caucasian ethnicity, the MMA star first signed up for modeling. Her height extending 5 feet 3 inches (1.61m) helped her prosper in the modeling industry, but in 2007, she decided otherwise.

Michelle worked as a ring girl at local martial arts events and one day decided to exchange punches instead of ring cards. Motivated by Donald Cerrone, she trained to her bones and landed a spot in the UFC. Climbing the ranks, she defeated powerful opponents one after the other and jumped to the tenth spot in her division.

Making her MMA debut in 2007, the former model quickly raised to the top 10 pound-to-pound female fighters on the MMARising.com. Training under the wings of famous MMA fighter Donald Cerrone, she gained confidence and the physical attributes to face her opponents head-on.

Now, the striker is one of the most deadly strawweight fighters in the UFC, who is on her three games winning streak. She is also one of the top individuals to battle for the championship.

Holding an impressive 18-9 win-lose career stats and three consecutive winning streak in the octagon, Michelle is sure to claim the strawweight title soon.

The featherweight earns a salary of $105,000, which includes $50K from the show, a $50K win bonus, and $5K as incentives. Not only that, her brand endorsements and sponsorships take Michelle's net worth to a massive $700,000.

Witnessing the star fighter's rising career and happy family of three, we cannot wait to update you guys more on her!