By LRU Writer | On: August 04, 2019
Tecia Torres has garnered her Mixed Martial Arts(MMA) career with great composure and...began practicing taekwondo specifically. Also, the youngster was an amateur muay Thai fighter for...moved into kickboxing and became four-time world kickboxing champion &...earned a massive salary of $68,500 in the... 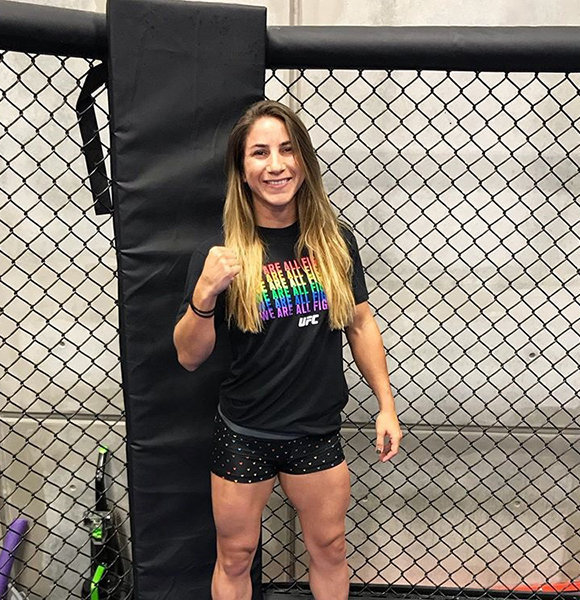 Stepping into the octagon for Invicta and UFC in the strawweight division, Tecia Torres garnered her Mixed Martial Arts(MMA) career with great composure and hard work.

The fighter emerged into the MMA scene after earning a black belt in Taekwondo at the age of 15.

Notorious for her one-punch power, the Fall River native gained massive praise from her bout against Rose Namajunas, which was named as the 2013 Women’s MMA fight of the year.

Tecia Torres got engaged to her girlfriend and longtime UFC crush Raquel Pennington in 2017. The lesbian couple dated each other for a year before finally exchanging the rings. Through Instagram, they shared their engagement pictures, where Raquel went down on her knees and proposed the love of her life. After incredible years of togetherness, the partners have continued to support each other even in 2019.

Soon, both the UFC fighters will be gearing up for a new season in the fighting ring.

MMA is one of the most hyped sports in the entertainment category. There is always stadium full of people that come to support their favorite superstar, and not a single day goes by when the stadiums don't erupt seeing a blood bath in the octagon.

Coming from the same sports background, Tecia Torres is rewarded with a huge net worth from her ventures in the sports industry like UFC and Invicta. She earned a massive salary of $68,500 alone in the year 2018.

Now, with the UFC moving for the first time in Uruguay in 2019 and an upcoming fight with the undefeated Brazilian Marina Rodriquez, Tessa's net worth is sure to rise up.

Tecia Torres was born on 16 August 1989 in Fall River, Massachusetts. Her parents raised her alongside three siblings in a family of six.

Growing up, Tecia always had a passion for martial arts. At the age of three, she began practicing Taekwondo specifically. Also, the youngster was an amateur muay Thai fighter for a short time.

In terms of measurements, her height of 5 feet 1 inch(1.55m) and weight of 52kgs gave her perfect balance in striking and pinning down her opponents. She even gained the name of The Tiny Tornado in the octagon.

Then, she made her professional UFC debut in 2012 and won the 2013 Strawweight Of The Year at the Women’s MMA Awards.