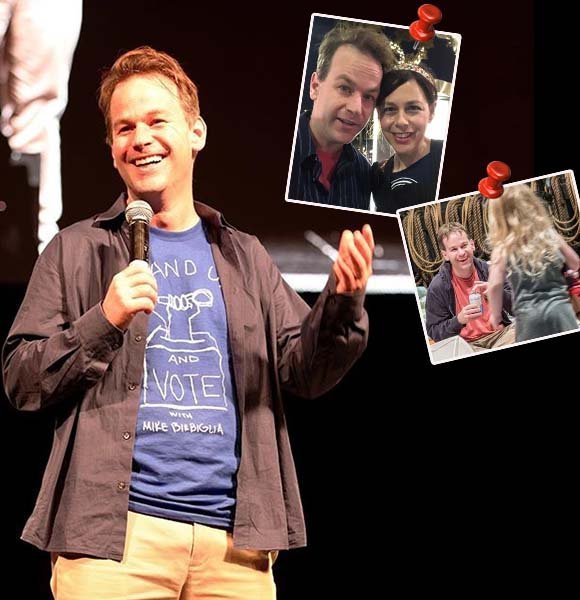 Stand-up comedian Mike Birbiglia is a multitalented personality. Apart from being a comedy genius, he is a playwright, actor, and director, best known for writing, directing, and acting in the critically acclaimed comedy-drama film, Don't Think Twice (2016).

Mike Birbiglia got married to Jen Stein on 7th July 2007.

Another Successful Comedian:- Hugh Dennis Married Status Now, Who Is His Partner?

Mike, who is a Catholic Christian, tied the knot to his Jewish wife at a private ceremony held in a City Hall. After eight years of marriage, the couple welcomed their first child, a daughter, Oona Birbiglia, in May 2015.

Mike's wife, Jen, is a poet who writes poems under the pen name, J. Hope Stein.

Throughout her career, Jen has published five books of poetry: Talking Doll, Mary, Corner Office, Occasionally, I Remove Your Brain Through Your Nose and Little Astronaut.

Apart from that, Jen was also a consulting producer on her husband's most significant project, Don't Think Twice.

Mike was born on 20th June 1978 in Shrewsbury, Massachusetts, USA, to Mary Jean (McKenzie) and Vincent Paul Birbiglia. He was raised alongside his brother, Joe Birbiglia.

Mike completed his high school from St. Mark's School, Southborough, Massachusetts, in 1996. Later, he attended Georgetown University and graduated in 2000.

Mike started his career as a server at a comedy club when he was in college.

But his career actually took flight after he got booked on the Late Show with David Letterman in 2002.

He has also added directing credits to his name with Sleepwalk with Me (2012) and Don't Think Twice (2016).

Throughout his career, Mike has won a Screen Actors Guild Awards (2016) and received nominations for American Comedy Awards (2014) and Gotham Awards (2012).

According to Celebrity Net Worth, Mike's career as a comedian, actor, writer, and director has rendered him an estimated net worth of $4 million.