By LRU Writer | On: November 06, 2019
Mixed Martial Arts fighter Mike Perry is a...began his training at the mere age...is a married man as of...fascinating story about how the couple met...relationship was not always the smoothest...Born in... did not have a regular family...grew up in poverty...got arrested...his time in prison changed him...stands at the height of ...his net worth in figures... 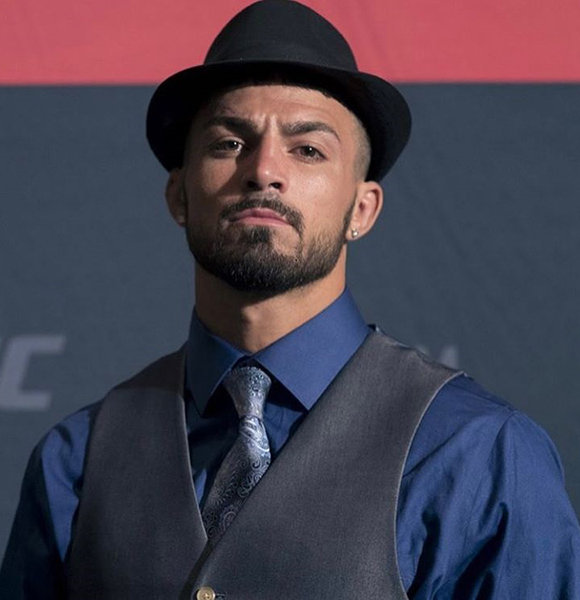 Mike, who began his training at the mere age of 11, is best known for competing in the welterweight section. The athlete has been awarded the Performance of the Night award twice by the UFC.

Mike Perry is a married man as of 7th September 2019. His wife, Danielle Nickerson, is also an athlete who plays professional tennis. Mike and Daniel tied the knot after dating for five years. There is a fascinating story about how the couple met.

In 2014, Danielle saw an ad for kickboxing class on a gym and called, but no one answered at the gym. Strongly determined, she searched for another gym and called there, but even they didn't answer. On her fourth try, a guy answered the phone, and it was Mike, who happened to be a trainer at the gym.

After that, the couple met and instantly hit it off.

However, their relationship was not always the smoothest. In 2018, Mike and Danielle parted ways from each other, after which Danielle accused Mike of having 'wandering eyes.' According to her, although there was no physical cheating involved, Mike definately wasn't entirely faithful to her. But eventually, everything sorted out, and they got back together.

Danielle has stood like a rock besides Mike. She has been his training partner, his diet planner, and cornered him for all his fights.

Born in Flint, Michigan, on 15 September 1991, Mike Perry did not have a regular family and a normal childhood.

As a child, Mike grew up in poverty, bouncing between various places in Florida and Michigan. Since a very young age, Mike admired gangsters and drug dealers seeing their fancy cars and housed and wanted to be like them. In his teenage, he got into drugs and started robbing houses to pay rent with his friends.

At the age of 19, he got arrested and was sentenced to six months in prison. However, his time in prison changed him and made him think he was capable of making a better life for himself. The day he got out of prison, he showed up at the UFC gym and never looked back.

Another MMA Star:- Darren Till Girlfriend, Wife, Daughter, Net Worth

Luckily, his father's boss had connections with MMA, and his jouney to be a professional fighter became a lot easier. After that, he made his professional debut in September of 2014, and his first UFC appearance came in August of 2016.

As of September 2019, Mike has a pro-MMA record of 13 wins, five losses, and 0 draws. For those who don't know, it's a pretty good record. With an impressive stat, it's evident that Mike has accumulated substantial wealth throughout his career.

Speaking of his net worth in figures, the Platinum Welterweight has disclosed $474,000 a total amount of as his career earning.

Well, being a professional fighter, Mike is no stranger to occasional injuries. But in 2018, during his fight with Donald Cerrone, he suffered a massive injury. Although many suspected that he broke his arm, luckily, there were no broken bones.