By LRU Writer | On: June 14, 2019
American TV anchor-author Molly Grantham...enjoys her birthday every year on...has been married since 2007...are parents to a second child, a son named Hutch...reluctant to have any children...possesses a height of 5 feet... 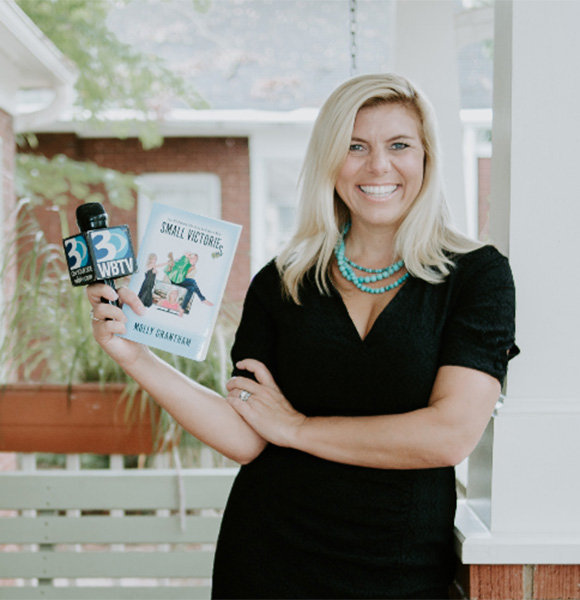 American TV anchor-author Molly has been involved with WBTV for than 15 years now.

Shas covered various breaking news that affected millions of lives all around the world. An advocate for people's right to information, the award-winning reporter's contributions to journalism can't be ignored.

Find all about the veteran anchor via her wiki to explore some aspects of her life, including age, salary, family, and more.

Molly was born in Mackinac Island, Michigan. She enjoys her birthday every year on the 11th of May. Her parents - who both died due to cancer - belonged to the middle-class background.

Post completing her education; she embarked on a mission to become a successful reporter. Her dream was fulfilled at WBTV, which allowed her to explore different stories and cover important breaking news.

Over the years, she has covered reports on the gangs of Charlotte, the Baghdad bombings, and more. For her contributions to journalism, Molly has been twice honored with the Emmy Award; once in 2008 and the second time in 2014.

Further, she is a published author, known for her children's book named Small Victories: The Off-Camera Life of an On-Camera Mom. The book is based on motherhood and raising kids effectively.

Molly is married to a loving and supportive husband named Wes. The couple has been married since 2007, but their love doesn't seem to be affected by the passing time.

Molly was initially reluctant to have any children. Although she was fond of kids, she didn't want to sacrifice her career and body for the sake of a child. However, a surprise pregnancy changed her perception of motherhood.

Welcoming her now eight-year-old daughter Parker was one of the greatest joys of the TV host's life. With the arrival of her first kid in April 2011, Molly learned that becoming a mother was indeed worth all the sacrifices.

Further, Molly and her husband are parents to a second child, a son named Hutch (born in October 2014). Molly with her kids Hutch and Parker in May 2019 (Photo: Molly Grantham's Twitter)

While Molly is very open about her kids, she hasn't mentioned much about her married life and husband. Nevertheless, the couple seems to be very content with their family of four.

Not only her reporting skills, but Molly is also praised for her physical beauty. Despite being a woman of age 41, her body measurements are like a 25-year-old woman.

Further, she possesses a height of 5 feet 7 inches (1.7m) as an average-sized American woman.