By LRU Writer | On: May 09, 2019
Major League Baseball outfielder Mookie Betts has been dating his girlfriend...... since.....years..... After..years of dating, they are reportedly engaged and it seems the wedding is in their cards. 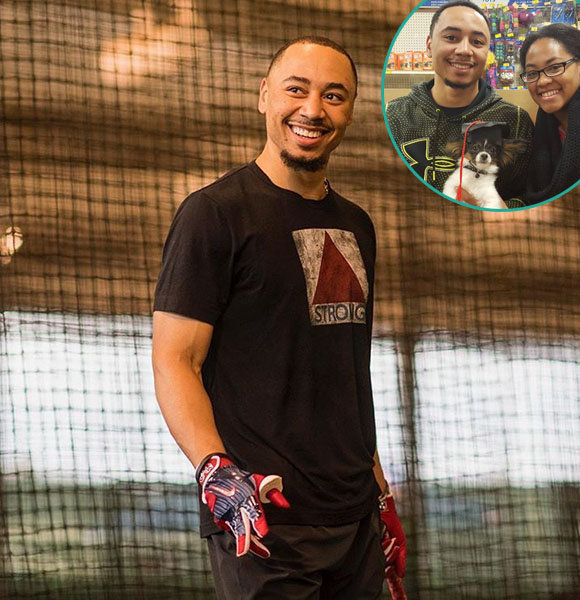 At the young age of 26, Major League Baseball (MLB) outfielder, Mookie Betts, has a doting career. With his demanding yet lustrous career, the player is notoriously waiting to add another graceful achievement with his long-time girlfriend.

Mookie has been in the dating life with the same lady since his middle school. Crossing many paths filled with both thorns and petal, they welcomed their first child in 2018.

The MLB outfielder hesitated to open his romantic chapters until he was on the field focusing on his career; his decade-long fairytale-like love story could not remain under the shed. 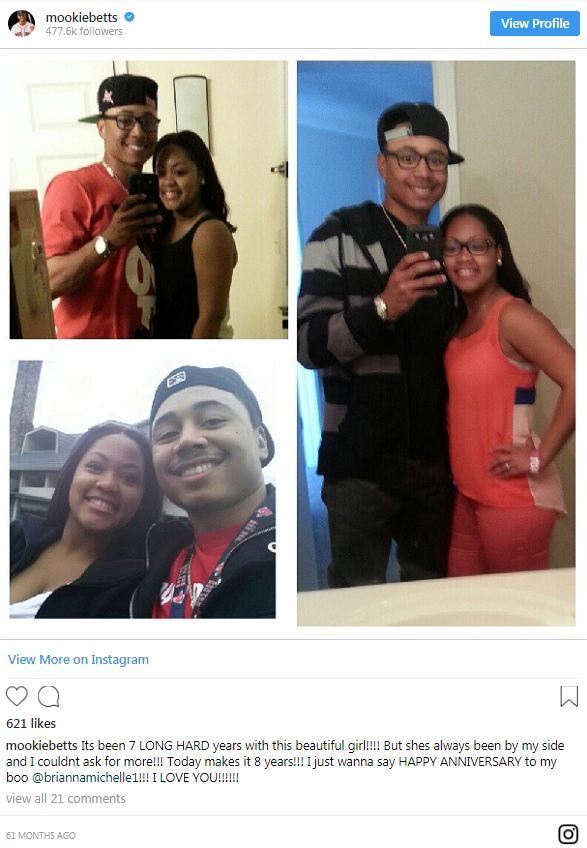 He first met his girlfriend Brianna Hammonds during middle school in 2005, and they have been dating since then.

The couple has embarked on more than a decade of relationship; together fighting in sorrow and celebrating in joy. With over a decade of their relationship, they are reported to march from their dating life to an engagement.

Though they never confirmed their committed relationship, a wedding registry which was registered under their name hints their wedding might be around the corner.

However, despite a handful proof about their 'newly engaged' life, the couple has not uttered anything about their engagement or any wedding plans-yet!

Welcomed Baby Before Wedding; 2018 His 'Best'

With their wedding rumors swirling around the air, Mookie Betts surprised the world with the news of 'Baby Betts.' Quite parallelly to his low-profile dating life, he kept his girlfriend's pregnancy a secret until his girlfriend, Brianna was six months pregnant.

On 8 August 2018, the father-to-be announced that his girlfriend is pregnant with their first child via tweet. He revealed - posting the edited newspaper effect titled, "The Betts Chronicle" - the due date of the baby to be on 19 November 2018.

And, his followers have pondered him with the well-wishes and congratulatory tweets. Mookie Betts announced the due date of their first child on 8 August 2018 (Photo: Mookie Betts' Twitter)

The happiest father-to-be was gushing all over the social networking sites about the baby Betts ever since he announced their first child with his girlfriend on his Instagram.

Read Also:- Greg Amsinger Behind Camera! Married With A Wife And Low-Key Relationship

The Boston Red Sox star and his girlfriend were eager to become parents, and so are his parents, who are always cheering him on while attending his game. His veteran US Airforce member father Willis Betts and his mother, Diana Benedict, have always been his central pillar of support in his career.

With a grandchild on the way, his mother reminisced back when Mookie was a toddler; she praised him as a naturally gifted athelete, saying- 'a gene of athletes was already arousing inside him.' On 6th November 2018, Mookie got the greatest gift of his life when he became the father of a beautiful baby girl.

Mookie had signed a contract with the Boston Red Sox with an annual average salary of $10,500,000. With his attractive salary, the young professional baseball players hold a net worth of $2 million.

2018 became the best year for Mookie, he won the 2018 American League MVP. The talented athlete became the second player in the history of baseball to win World Series, Gold Glove, Silver Slugger and MVP in the same season. Interestingly, it was the first time in American League history. Add to that; he won Gold Glove three times in a row.

Due to his incredible performance as Boston Red Sox member, he negotiated a raise in the salary.

While Mookie had been an increase in the paycheck since 2017, his incredible performance in 2018 finally convinced the bosses of his team. Thus, they agreed to increase his paycheck by an additional $9.5 million. As of 2019, he started making a massive $20 million salary per year.

Fans cannot wait for him to repeat the incredible performance in 2019.