By LRU Writer | On: September 24, 2019
Nat Fyfe was blessed for his hard work and consistency when he received the second Brownlow medal of his career on...his goals ahead of the new season and added to his desperation for a team...was going through a brief injury period and Elli so happened to be a...is not very much into football and possess a laid back attitude towards Nat’s... 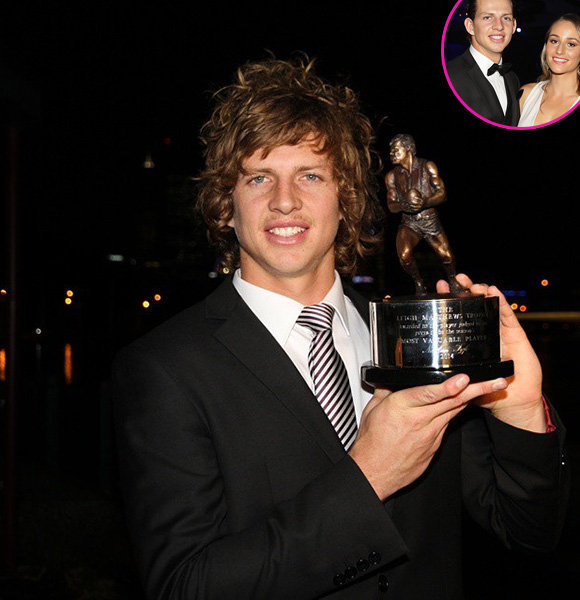 The Fremantle captain, Nat Fyfe was awarded the second Brownlow Medal of his career on 24 September 2019. He first claimed the award back in 2015.

After receiving the honor in front of a house full crowd, Nat acknowledged the value of the prize. Further, he appreciated being listed amongst top quality players like Patrick Dangerfield, Lachie Neale, and Patrick Cripps.

Similarly, the Fremantle skipper revealed his goals going ahead and added to his desperation for a team AFL trophy. To know more about his roots of success, let’s dive right into the article.

Behind every successful man, there is a hand of a woman. The same is the case with Nat Fyfe.

After being awarded the prestigious Brownlow Medal for the second time in 2019, the footballer mentioned the importance of a supportive partner to achieve such success. Also, he praised his longtime girlfriend, Elli Brashaw for being stable support for his achievements.

Nat and his musculoskeletal rehabilitation expert girlfriend were first spotted together back in January 2016. During the time, the athlete was going through a brief leg injury period. And, Elli was by his side when he went through leg surgery and subsequent recovery. Shortly after that, the two appeared together as a couple in the Brownlow Award ceremony in 2016. Now, with the courtship of over three years, maybe Nat and Elli will take their relationship to the next level.

Previously, the football star dated physiotherapist Kaidee Arnold. After their split in 2015, he was romantically linked to a nursing student, Taylah Hunter. But, Taylah dismissed the rumors and claimed that the pair were just friends.

Nat Fyfe rewrote history as he was named the 15th overall football player in VFL/AFL history to receive the Brownlow Medal, for the second time in his career.

Born and raised in Lake Grace, Australia by his parents David and Christine Fyfe, Nat is the youngest of the two children with an elder brother named Liam Fyfe. His father has his own trucking family business in Australia.

Shockingly, his family is not very much into football and possess a laid back attitude towards Nat’s sucessful football career. Regarding such opinion of his family, Nat considers himself very lucky. According to him, with such a healthy environment, he can quickly adapt to the world outside of the football ground as well.

As a teenager, he attended Aquinas College and played junior level football for Claremont in the WAFL. At the start of his playing career, he was lean, which raised the question regarding his physical attributes and body weight.

Realizing the fact, the athlete of height 6 feet 2 inches (1.92m) trained hard and also got drafted in AFL in 2009. Now, at age 28, he is the captain of his football team and looking to convert his excellent run of form to win an AFL title.