By LRU Writer | On: January 17, 2020
Nate Berkus is a design expert known for hosting...Nate came out as gay during his college years...He also worked on the TV show, Nate & Jeremiah by Design (2018-2019) with his husband...carries a net worth of...The pair has two children...Facts On Nate Berkus Including Age...the wedding was...knew about his sexuality from the age of... 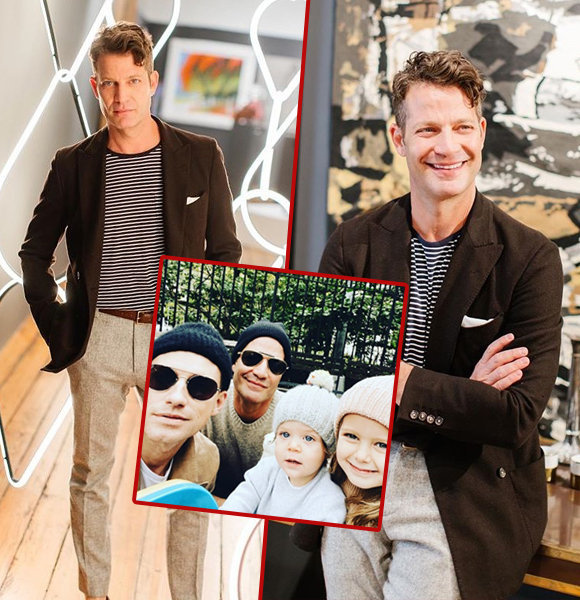 Design expert Nate Berkus is known for hosting The Nate Berkus Show (2010-2012). He was also the resident interior designer at Oprah Winfrey Show from 2004 to 2011.

Nate is also an author known for The Things That Matter (2012) and Home Rules: Transform the Place You Live Into a Place You'll Love (2005).

Nate came out as gay during his college years. He knew about his sexuality from age 8 or 9 but chose to keep it a secret. However, Nate’s stepfather found out about it via his love letter. Nevertheless, he supported Nate.

The design expert has opened about his sexuality in his semi-autobiographical book, The Things That Matter. Poppy and Oskar were born via surrogacy.

Who Is Jeremiah Brent?

Jeremiah is a furniture and interior designer. He is the founder of Jeremiah Brent Design, a successful design firm. He also worked on the TV show, Nate & Jeremiah by Design (2018-2019) with his husband, Nate.

Nate and Jeremiah were friends for a long time. They happened to meet at a mutual friend’s birthday party, which led to an antique shopping date. The date turned into a life long courtship for the couple.

Celeb Wedding:- Nicole Williams Engaged To Wedding Details, How Much Is Her Worth?

Nate and Jeremiah got engaged in 2013 in Peru. They got married a year later at the New York Public Library as the first same-sex couple to get married at the esteemed location. The wedding was officiated by Sheri Salata.

Nate was previously dating Fernando Bongoechea. The pair was on vacation in December 2004 in Srilanka when Tsunami hit the country. Sadly, Fernando passed away.

To honor his ex-partner, Nate named his son Oskar, which was Fernando’s middle name.

Nate’s net worth is $18 million, according to celebritynetworth.com.

Facts On Nate Berkus Including Age