NBC News' Stephanie Gosk is Happy With Her Lesbian Partner/Girlfriend Jenna Wolfe. Are They Planning to Get Married?

By LRU Writer | On: March 02, 2021
NBC News foreign correspondent, Stephanie Gosk and TODAY lifestyle correspondent, Jenna Wolfe and have been a couple of four years now. However, the question still lingers if a marriage is on the way. The pair has responded to the queries and has said that they will indeed get married but will deal with the little big things first. - Babies. 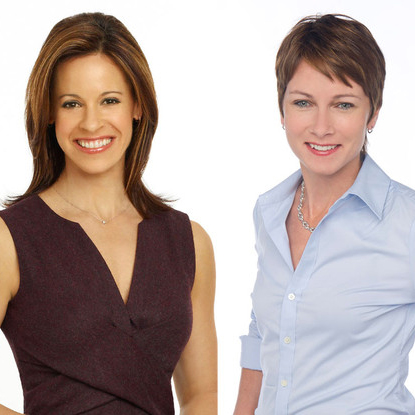 People find love in the simplest things, so it is no wonder to get some tears down when something life-changing happens. Like the finding a soulmate maybe?

Surely, Stephanie Gosk and her partner in crime AKA her girlfriend Jeena Wolfe will suit this story.

NBC News foreign correspondent, Stephanie Gosk and TODAY lifestyle correspondent, Jenna Wolfe and have been a couple of four years now. However, the question still lingers if a marriage is on the way. The pair has responded to the queries and has said that they will indeed get married but will deal with the little big things first. - Babies.

In 2013, Jenna talked about getting ready to have a daughter and her future marriage plan with Gosk.

Me and Gosk have been  together  for  three years, plan to wed and embarked on “operation Baby” in December . We’d like to get married,but with everything we’re doing we haven’t set a date.

In 2013, Stephanie and her girlfriend Jeena welcomed their first daughter. Jeena got pregnant via insemination from an anonymous donor. They named their daughter Harper Estelle.

After about two years, the power lesbian duo welcomed a daughter - as planned.

In an interview with Today just moments before her daughter's birth, she talked about the prospects of having a second daughter saying

Steph and I listened to every piece of advice that came our way before Harper was born and then quietly sat back and enjoyed being first-time parents making first-time mistakes and collecting first-time life lessons. And now we’ll do it again. We'll figure out quickly how to be second-time parents, with all that comes with that beautiful title.

We felt like we wanted to share our adventures  with a wide-eyed ,little person. The more we talked about it,the better the idea seemed.

Background On Their Dating History

Stephanie and Jeena, like most other public figures, met while on work. Wolf is an avid sports and health fanatics who like to spread her gospel about healthier life to people from every walk of life; Gosk frequently reports from war-torn countries. Despite their different specialty, both belong to the media field which in ways help them to manage and understand busy schedules.

However, despite sharing uncountable special moments together and planning to get married for good, it has not happened yet. Who knows, maybe another pair of little feet is on the way.

Stephanie Gosk (born on 1971) is an American journalist and correspondent who works for NBC in New York City. Gosk contributes to all platforms of NBC News, including Today NBC Nightly News and MSNBC. Stephanie Gosk graduated in BA in Economics from the University of Georgetown.

Jenna Wolfe, an American journalist, and Fitness Enthusiast, is a correspondent for NBC's TODAY and has worked as a co-anchor for Weekend Tv show Weekend Today alongside Erica Hill, Dylan Dreyer, and Amy Robach. A Jamaican-born, Haiti native, Jenna graduated from Binghamton University with Bachelor of Arts degrees in French and English in 1996. She's known for her efforts to improve America's lifestyle directly and indirectly through her efforts and introduce a better lifestyle standard in America.