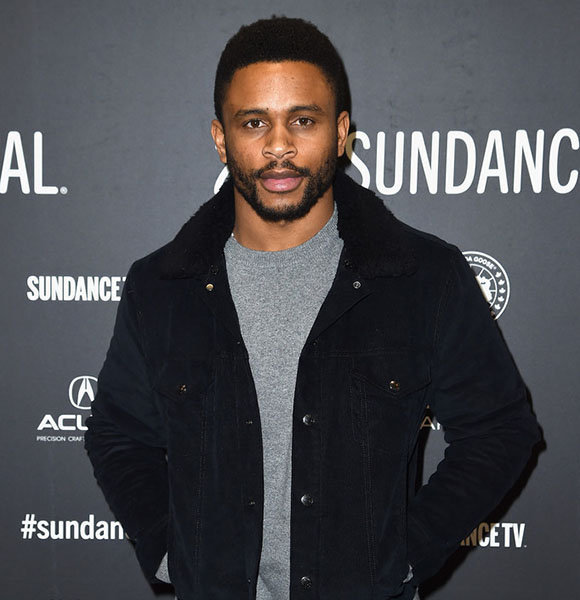 Nnamdi Asomugha is a retired professional football player who began his career as an outstanding free safety at the University of California.

After graduating from college, he began his NFL career with the Oakland Raiders; he was taken in the first round of the NFL Draft in 2003. Nnamdi also played for the Philadelphia Eagles and the San Francisco 49ers later in his career.

He was named to the All-Pro team four times and to the Pro Bowl thrice during his NFL career. In addition, in 2006 and 2008, he received two MVP Awards.

With his busy professional life, he has balanced his personal life perfectly. Keep scrolling to find out more about his married life.

The NFL star and his wife first met in 2009, when Nnamdi went to see a Broadway play- Race, in which Kerry starred. Shortly after, the duo started dating.

After being together for a few years, Nnamdi asked Kerry to be his wife, and the duo tied the knot in a private ceremony on 24th June 2014. Their low-key wedding ceremony was held at one of the bride's friend's houses in Hailey, Idaho.

The couple flew their family and close friends on a little private plane and exchanged the wedding vows in a simple minimalist ceremony.

Nnamdi's wife, Kerry Washington, is a well-known American actress for her role as Olivia Pope in the political drama series Scandal (2012-2018).

Another Actor From Scandal:- Daughter Of Famous Parents Zoe Perry Is Hiding Her Age! A Bio That Might Just Reveal It

Nnamdi is a father of two kids with his wife, Kerry Washington.

The couple had their first child, daughter- Isabelle Amarachi Asomugha, on 21st April 2014, and their second child, the son- Caleb Kelechi Asomugha, was born on 5th October 2016.

Nnamdi Asomugha was born on 6th July 1981 in Lafayette, Los Angeles, California. He is a descendant of Nigeria's Igbo tribe. Nnamdi Asomugha stands at the height of 6 feet 2 inches (1.88 meters).

Nnamdi graduated from the University of California with a degree in Corporate Finance. He is the first athlete to be awarded the Jefferson Award for Public Service, which honors is considered the American Nobel Prize for community service.

In December 2013, he announced his NFL retirement after 11 seasons. The former NFL star is also a philanthropist who founded the Asomugha Foundation, supporting education and empowerment for youth, widows, and orphans.

Keeping his NFL career apart, he made his professional acting debut on The CW Network's series The Game in 2008. n 2017, he produced and acted in Crown Heights, an Amazon Studios feature.

As of now, he has been focusing on being a better producer and has been working on different projects.

According to Celebrity Net Worth, from his career as a professional football player, Nnamdi has earned a net worth of $35 million and a salary of $4 million.

Stay tuned to get more updates on Nnamdi Asomugha.