By LRU Writer | On: February 20, 2019
Nigerian-American actor, Nyambi Nyambi has shown his acting talents in TV shows like The Good Fight and Mike & Molly; but as he is often cast in the minor roles, a lot of the actor's potential is yet to be discovered...While fans appreciate his dedication towards acting, they are more interested in getting inside the personal life of this fine actor... 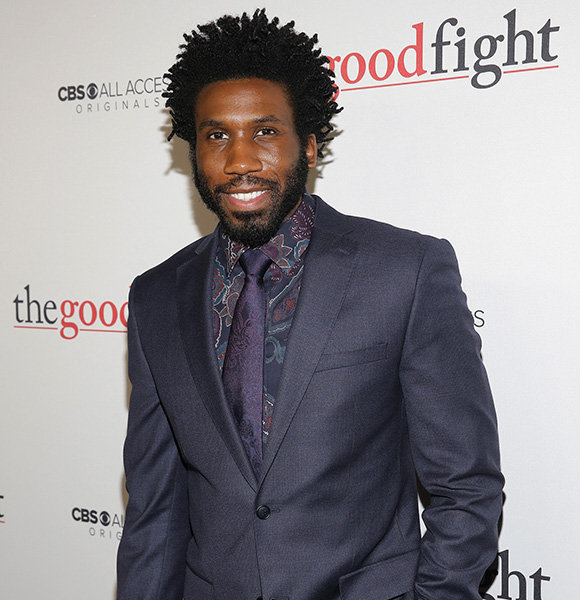 Nigerian-American actor, Nyambi Nyambi has shown his acting talents in TV shows like The Good Fight and Mike & Molly; but as he is often cast in the minor roles, a lot of the actor's potential is yet to be discovered.

While fans appreciate his dedication towards acting, they are more interested in getting inside his personal life.

As the actor keeps a low-key profile and often jokes about his dating life, it would be a foolish mistake to take his comments literally. But, sometimes in desperation Nyambi has revealed some intriguing details about his relationships.

So, is the actor dating anyone at the moment or leading a single lonely life? Let's find out!

Married Or Single?; Desperate To Have Girlfriend?

Nyambi has been secretive about his lovelife since the day he joined Hollywood and has not been linked to any possible girlfriend throughout his career.

However, he often loves to compare his reel and real-life's characters and their dating relationships. Nyambi - who plays the role of Samuel in the CBS' long-running show, Mike & Molly - sounded desperate in 2012 when he asked followers on Twitter to guess if he would get a girlfriend in the show or reality first.

Further, when he was asked about his character getting a girlfriend in 2014, Nyambi replied with optimism saying that the American lifestyle was better in the presence of a partner.

But, it looks like Nyambi hasn't been able to maintain a relationship, neither on screen nor in real life. Even though Nyambi is single at the moment and far from getting a wife, he often provides his fans with his expertise on the matter.

Nyambi is known to give valuable opinions to couples, who are about to get married.

The Good Fight Actor's Parents, Age Plus Net Worth

Although Nyambi's relationship hasn't been much successful, he still has his family whom he loves dearly. The Good Fight actor, who ages 39 as of February 2019, was born in Oklahoma as one of the three children of his parents: Nyambi Nyambi Sr. and Atai Nyambi. He has two sisters named Bassey and Eyang Nyambi.

Nyambi, who has not revealed his net worth, is exceptionally close to his parents and loves to spend his free times with them. The actor has not disclosed much about his siblings, probably to protect their privacy, but he supposedly maintains a healthy relationship with them too. Interestingly, his parents have been married for over 40 years now. Whenever an occasion comes, Nyambi's social media gets filled with loves and affection dedicated to his family.