By LRU Writer | On: September 15, 2019
Paige Hathaway is an American fitness cover model, entrepreneur, and social media star famous for her impressive Instagram following... which included husband ...along with her current boyfriend...who is an entrepreneur...followers reached the millions after she started to show off her well-built body on Instagram. After winning the first competition, she had to suffer the two... she was linked with Jennifer Lopez's ex-boyfriend... 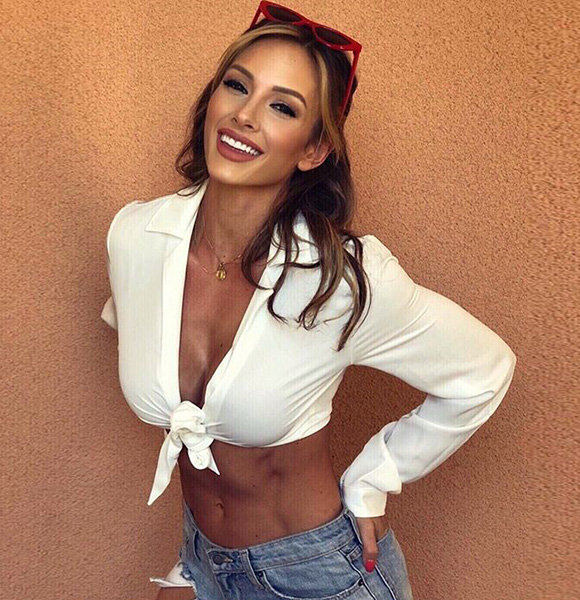 American fitness model Paige Hathaway takes as an insult if anyone denotes her by Instagram model. She is the creator of the fitness empire, Fitin5 Challenge, and boasts over 4 million Instagram followers.

She also runs a YouTube channel with more than a hundred thousand followers where she shares various diet and exercise tips along with vlogs.

Paige was born in Minnesota on 31 July 1987 to an alcoholic father and mother. Paige parents got divorced when she was just a toddler, so she grew up shuffling between her paternal and maternal grandparents home and foster care. However, on her 16th birthday, she settled in the state of Oklahoma.

See Also:- Does Sommer Ray Have A Boyfriend Or A Dating Affair? The Stunning Model Cannot Be Single Or Can She?

Taking fitness classes at the age of 24, she got the break into her career as a guy offered to train her for the bodybuilding competitions. Despite her numerous refusals, he insisted on her, and she agreed, and she ranked 2nd in her division of the 2012 Ronnie Coleman Classic.

Since then, she has been on the highs of her life. Her Instagram followers reached the millions after she started to show off her well-built body on Instagram. After winning the first competition, she had to suffer the two losses, but still, she stood firm and continued her journey.

Then she sent her portfolio to many publications but could not get the one. But, after a visit to 2012's Olympic Expo, she was signed by a company providing nutritional supplement and fitness information, Shredz.

Related To Fitness Model:- Catherine Paiz's Life Details Are All Over Social Media! From Her Pregnant Day With Boyfriend To Her Height

Also, she earns the right amount of salary from the modeling agency. For endorsing companies like F45, she gets paid to seven figures every year, which also reached the seven-figure amount.

With the hefty amount she earns, her income surely benefits her net worth, which she has not revealed yet.

The American fitness cover model, Paige has many dating options if she looks on her fan followings alone. And considering her fanbase, it would be hard to believe if anybody says, she was not dating anyone.

She has a dating history which might amaze her followers. She had also dedicated her tweet to her ex-boyfriend, which at that time was unknown. Also, she hinted at her relationship status that she is single on 2015 tweeting:

"Just found out my boyfriend suffers from non-existence."

But that was not true; her boyfriend did exist as she flaunted her relationship with the Bachelorette alum Chase McNary in March 2017. The news about their relationship status aired after the Chase denied to enter into the Bachelor in Paradise and confessed that there is someone, he is involved romantically with

During that time, Chase refused to reveal the name, but he indeed hinted that she is from Los Angeles and met through mutual friends. However, the Bachelor's fan quickly cursored through Chase's social media account and found the dating relationship between the couple.

Also, he confessed that the pair were in the early phase of their love life. Also, he moved to Los Angeles, but she stomped on his heart. However, like the silent start of their relationship, they parted their ways more smoothly that no one noticed.

It seems the couple was only together for a couple of months as in November 2017; she was linked with Jennifer Lopez's ex-boyfriend Casper Smart. The couple also went on the romantic getaway to Miami where he shared the series of snaps with the fitness model.

More on Casper Smart:- Casper Smart After Accused Of Being A Gay Has Recently Called It Quits With His Singer Girlfriend; A Rumor

Talking with the Cosmopolitan in December 2017, she had expressed her desire to get married.

The Minnesota native spoke about her plans, which included husband and children. She also disclosed that the previous dates used her as a tool to gain fame, so, she was searching for a partner with a good career.

As if her wish turned true, Paige found her true love in Jason Moritz, an entrepreneur. He is a co-founder of white buffalo hemp company, an industrial hemp supplier based in Denver

Not only dating but the duo commenced their relationship so well that they decided to parent a child. In April 2019, Paige Hathaway went onto reveal the news about her pregnancy among her well-wishers through social media. Even in her pregnancy, Paige Hathaway managed to remain active and engage in fitness and workout. She shared her maternity pregnancy workout tips and experiences to her followers, including her diet routine, which consist mostly of protein and organic foods.

As per Paige, her workout routine only changed a little as she only skipped on some exercises that affect her belly negatively. Apart from these exercises, she continues her extreme workout by lifting weights. Her drill mostly focuses on the chest, back, and muscles along with daily squats.

Even during her twenty-one week of pregnancy with a baby girl and Paige still inspires people all through her dedication to fitness.

While she continued with her daily routines and fitness regimen, Paige soon sidelined from the fitness industry to provide better care for her baby girl. As of 13 Sept 2019, the pregnant lady went into labor. Paige posted an exciting picture to inform their well-wishers and followers through an Instagram post.

With the caption "  It’s happening " Paige and her boyfriend, Jason Moritz Sebastian were seen preparing for the special moment. A few hours later, the couple welcomed their first child together. I’m CRYING!!!!! ??? The wait is finally over!! Please help us welcome our healthy baby girl into this world, Presley Marie Sebastian! Born September Friday 13th, 2019 at 4:49am.

couldn’t be more in love with you! Never seen anything more beautiful in my entire life.

Thank you so much for the all love and support.... ? More to come from our delivery very very soon!

As Jason stated, more news regarding their daughter is Presley Marie Sebastian yet to come.