Know About Patricia Arquette's Husband, Net Worth, Children, And More 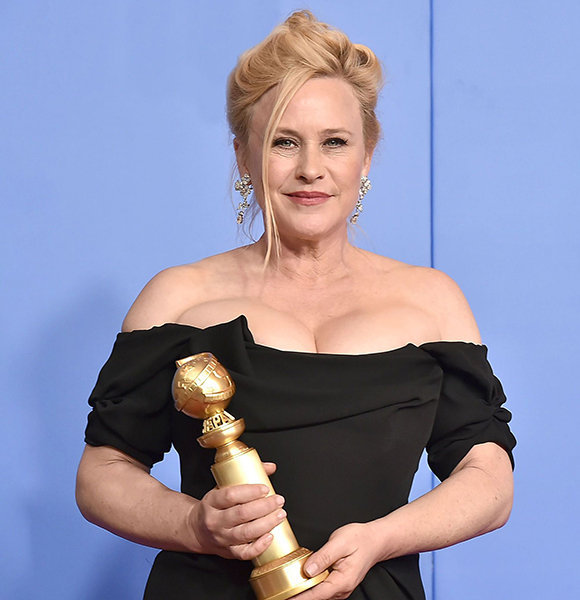 American actress Patricia Arquette is best known for her role as Olivia Evans in the drama film Boyhood (2014). So applaudable were her acting stints on the show that she got a Golden Globe Award for the best-supporting actress and a nomination for Academy Award for Best Supporting Actress.

Regardless of her successful professional life, Patricia was married to her husband, who was a big name in the industry. But, what's her relationship status now?

Patricia is currently dating Eric White, age 53, for the last eight years. Even though they have been together for so long, they have not tied the knot yet. However, they have a loving relationship between them and always have each other’s back.

Nevertheless, Patricia has got exciting accounts in her love life.

First, she dated Paul Rossi, a musician. Although never married, the duo gave birth to a son named Enzo Rossi on 3 January 1989. Patricia shared her picture when she was pregnant with her son, Enzo. (Source: Instagram)

After that, however, their relationship turned south, and the couple separated in 1991.

A few years later, in 1994, to be precise, Patricia dated a big name in the industry, Nicolas Cage. Then, Patricia married her husband, Nicolas, after dating for a year in April 1995. But, things did not work out between them as well, and eventually, Patricia and her husband officially dissolved their union in 2000.

Soon after, the actress moved on to a relationship with another actor, Thomas Jane. Patricia got engaged to Thomas in 2002 and welcomed their daughter, Harlow Olivia Calliope Jane, in 2003. Despite exchanging the wedding vows as husband and wife in 2006, the couple's time together was short-lived.

In 2009, rumors about Patricia and her husband filing for divorce started spreading. Three years later, in 2011, the stories turned out to be accurate as Patricia's divorce from her husband was finalized.

However, there is still no news about her getting married again to her now-boyfriend.

Even after having many ups and downs in Patricia’s dating life, she never let it harm her professional life.

Patricia was born on 8 April 1968 to parents; Lewis Arquette and Brenda Olivia in Chicago, Illinois. She has two sisters, Rosanna and Alexis, and two brothers, Richmond and David. Her siblings are also in the same boat as her; they are all actors.

For her measurements, Patricia is on the short side of the average American woman's height. She is five feet two inches (1.57 m) and weighs 65 Kg.

Patricia’s journey to her acting career started when she moved from Illinois to California with her family at a young age.

The shift to the land of Hollywood took her to choose a different path than she wanted. She had dreamt of becoming a midwife. Instead, however, she ended up becoming an actress.

Starting, Patricia played small parts, such as Stacy in Daddy. But, she quickly rose to fame with her role as Alabama Whitman in the movie, True Romance in 1993.

Her notable role in the successful movie led to much more prominent roles. Patricia ended the '90s with renowned movies; Goodbye Lover (1998) and The Hi-Lo Country (1998) and a horror film, Stigmata (1999). She also played a part in a terrific Disney movie based on Louis Sachar's novel, Holes. Released in 2014, Patricia received immense recognition for her role in the film.

Still, Patricia isn't done by a long shot; she continues to land more prominent parts in the industry. And with that, she has amassed massive wealth for herself. Her net worth is currently pegged at $24 million.

Patricia also starred in the movie, The Act, which is based on a real-life murder case. In 2022, She also began co-starring in the Apple TV+ thriller series Severance. She is still working hard in her career.

However, she is currently living peacefully with her boyfriend. We hope to hear the wedding bell soon from their side.

We will surely update you guys more on Patricia Arquette. Till then, stay tuned.