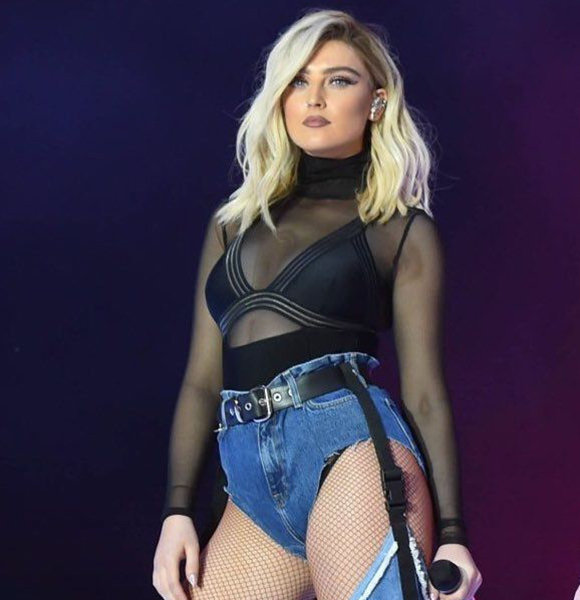 Perrie Edwards is a British singer. She is best known as a member of the girl band Little Mix. The band that was formed in 2011 won the 8th season of the X-Factor UK. Afterward, it got signed by Simon Cowell’s music label Syco.

Thanks to her career in music and the immense success of her band, Perrie has been able to enjoy the finer things in life. She already has an estimated net worth of almost $4 Million.

Who Is Perrie Dating? Ex-Boyfriend Details

While on X-Factor in 2011, the Little Mix singer was in a relationship with former One Direction singer Zayn Malik.

The couple’s relationship was tremendous on social media with everyone guessing over how perfect they were for each other. Taking their relationship to the next level, Zyan proposed in 2013. Perrie even showed off her engagement ring on Little Mix’s music video “Love Me Like You.”

However, the couple parted ways in August of 2015. Perrie later revealed that Zyan broke up with her over a text message.

While Zyan moved on to date the supermodel Gigi Hadid, Perrie started dating England football star Alex Oxlade-Chamberlain at the end of 2016. The couple kept their relationship low key at the start because of all the media attention due to the split with Zyan. However, Perrie confirmed she was dating Alex in January of 2017 by posting a photo of him on her Instagram handle.

In November of 2018, the singer stirred her fanbase when she posted a mirror selfie on her Instagram. Besides the usual of Perrie being a cutie, fan’s attention diverted to the new ring on her finger. Did the couple get engaged in secret, or was it just a gift? Neither Perrie nor Alex has confirmed anything on the matter.

Perrie Edwards was born in South Shields, Tyne & Wear, England, UK. Her date of birth is 10th of July 1993.

Born to music enthusiasts parents, Alexander Edwards and Deborah Duffy, the 25-years-old was named after the lead singer of the rock band Journey, Steve Perry. She is the middle child of the family; she has an older brother named Jonnie and a younger half-sister named Caitlin from her father’s side.

Also From England:- Having A Perfect Personal Life Wife And Kid Jordan Henderson Still Has To Deal With Incurable Heel Injury

Being a member of the Little Mix, Perrie has become the eye candy for millions of people globally.

The beautiful blonde singer with blue eyes stands with a fantastic height of 5 feet 4 inches (1.63m) and weight to compliment her figure, 54 Kgs. Also, she has a perfect body measurement of 34-25-34 inches.