By LRU Writer | On: April 24, 2019
Pete Holmes Went Through Infidelity Issue With Wife But Currently Seems To Enjoy Time With Girlfriend. Laughter is the best medicine, but the man who makes you people laugh through his comical ideology might be suffering from internal emotional fluctuation which the audience can never feel and observe till it surfaces in the media. 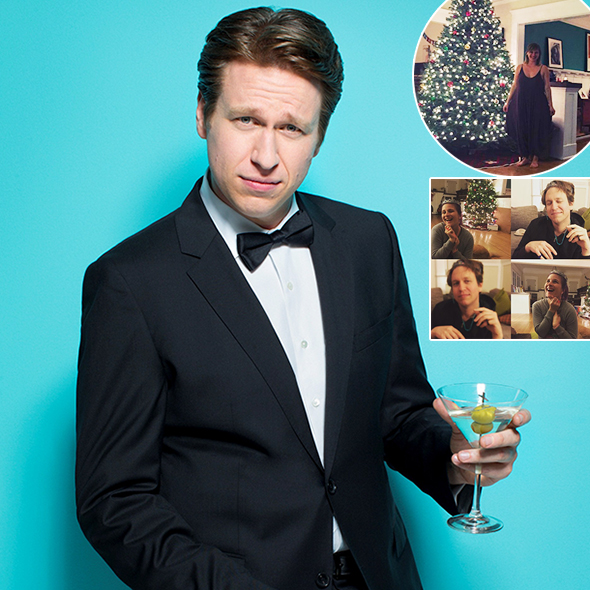 Laughter is the best medicine. But the man, who makes people laugh through his comical ideology, often suffer from internal emotional fluctuation, which the audience can never feel and observe until it surfaces in the media.

Comedian Pete Holmes once went through a relationship trauma when his former wife landed him in a tangled divorce, but for now, the comedian seems to be back in form with a real dating scene.

Today, let's fit in the jigsaw puzzle of infidelity issue of comedian Pete Holmes and get hold of his present relationship status.

Reason For Divorce: Infidelity Or Unknown?

Stand-up comedian Pete Holmes got married to Becca in his early 20s. Though the events of their wedding is still a secret, the divorce is not. Pete Holmes divorced his former wife, Becca at the age of 28.

When interrogated about the reason for his divorce, the stand-up comedian confessed about the infidelity by his wife. Pete openly stated the primary cause of the divorce as an extra-marital affair his wife had with a man named Rocco, to whom she is married now.

Though the exact date of their divorce is undisclosed, as per NYTimes, Pete took the entire blame on himself during his late night talk show “The Pete Holmes Show.” He expressed,

“She ended it, but I was at fault. That’s right. Just another late-night monologue in which the host analyzes the role he played in the decay of his own marriage.”

Similarly, while interacting with his admirers through his fan page on reddit.com, his fans asked Pete about the feelings he had for the wedding and his ex-wife. In response, Holmes revealed the distance he maintained with his ex-wife for several years after the divorce.

"I haven't talked to my ex since the split, like six or seven years ago, but who knows. I try to keep the oversharing about me and so far it's worked out. jeselnik didn't like that I told people he meditates and does yoga, but he's out about that now, at least I think."

The divorce must have shaken Pete thoroughly as he was born and raised in a Catholic family with the mentality of staying a virgin before getting married and be a one-woman person. So it’s evident for him to get emotionally drained out after getting an annulment from the marriage of seven years.

Still Affectionate For Becca Or Has Pete Moved On?

Once Pete Holmes was surrounded by gay rumors after he declared himself as gay at the premiere of Nice Try: The Devil, which aired on 12 May 2013 on Comedy Central. The comedian had released a statement claiming he was “gay for Gosling.”

Soon after his statement, he revealed the reason for considering himself as gay. He asserted to have an exception in his straight attitude only for Gosling, whom he reckoned to be a sexy man.

It looks like Pete has moved on from his marriage, as he seems busy with a beautiful girl named Valerie Chaney, who entirely hails from the non-celeb background.

However, Holmes confirmed his relationship with a mysterious woman through Instagram on 17th October 2015, where he kissed the lady and declared themselves as a couple.

Since then, he has opened up about his relationship through a series of couple snapshots.

Pete turned his girlfriend Valerie Chaney into wife when the pair got married on 10 November 2017. The couple tied the knot following a romantic hot air balloon ride at Santa Barbara.

While on a press tour for his HBO comedy series Crashing, he shared an anecdote about his engagement. Eavesdropping on the beautiful moment was a man, who operated the hot air balloon. In the limited space, the soon-to-be-engaged couple could feel the heat of his breath. Add to that he repeatedly said the word "gay" after each sentence.

When Pete finally proposed to his girl, she took some time during which according to him, the balloon operator said,

Luckily for the actor-comedian, Valerie didn’t listen to the amusing man and affirmed to Pete's proposal. Happiness followed Pete and his wife as less than a year after the pair got married, they welcomed a baby girl named Lia on 26 September 2018.